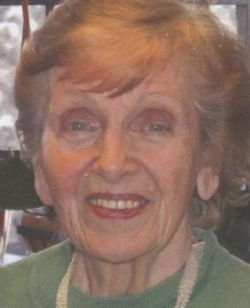 
Alma Doreen Warren McLendon, 83, passed away Tuesday, January 9, 2018. She was born on January 13,1934 in Birmingham, England to Harry and Hilda Davies. Alma met Herbert Warren while he was stationed in England with the United States Air Force. They were married and Alma immigrated to Galveston, Texas with her new husband where they had two children. Andrea and Earl Bruce

Following Herb's death in 1978, Alma was lucky to find love again. In 1983, she married Robert McLendon of Houston, Texas, where they would reside for nearly 15 years. When Alma retired as office manager of Leachman Cardiology they moved to Center Point, Texas to enjoy the hill country.

Alma loved painting, gardening, shopping, traveling and spending time with family. She enjoyed lunching with the Red Hats and was a member of the Center Point Garden Club and the American Legion.

A special thanks to her many long-time friends in Center Point and caregivers at Brookdale Guadalupe River Plaza.