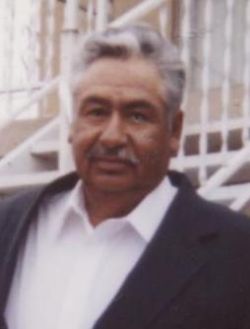 
Arnulfo Vasquez Valenzuela, 64, of Ingram, Texas, went to his heavenly father from the home of, Mary Herrera, his daughter in Ingram, Texas on Friday, September 22, 2017. Arnulfo was born on March 8, 1953 to Amalio Valenzuela and Maria Vasquez in La Murella Cd, Acuna Coah Mexico. He was raised in La Pileta Cd Acuna, Mexico with 10 siblings. At the age of 13, he was no ordinary young man, he was extraordinary. He found his way to what is now the YO Ranch. There he met young Charles Schriener Jr. who was just several years older than him and would drive him out to his job site for the day, where he would cut and prepare cedar for fencing. But before that, he would cook big pots of beans and make 20 dozen of flour tortillas for the ranchers and staff. In 1974, he found himself in Cleborne,Texas and that is where he fell in love and married his one and only true love, Mary Helen Bostos, together they had five beautiful children. Over the years he worked, in different states such as Oklahoma and Florida. Work brought him and his family to Kerrville in 1981, for the next 36 years, he lived in Kerrville. He worked all his life very hard to provide for his family in many different fields which included construction, landscaping at the Golden Eagle, LB Brinkman, Retama and Maldanaldos. He also worked at the Sid Peterson in the kitchen and at the Inn Of The Hills.

He loved all his children and enjoyed watching them swim, play and ride their bikes. He always had a cheesy jokes and riddles for all that kept everybody laughing. Arnulfo loved to fish and explore the Guadalupe River with his children and grand children. He enjoyed cookouts, cooking, crossword puzzles, sudoko, reading and cold beers. He had a green thumb and could grow anything. He was very humble and free spirited. He was a kind and gentle man who saw no reason to with hold love from anyone. He was selfless and lived a simple happy life as long as he was surrounded by those he loved. In his 36 years in Kerrville he made friends easily. He called everyone a friend. With his heart bigger than Texas, he knew Gods love and that's what he gave to all

Arnulfo was preceded in death by his parents, two brothers, one sister, mother and father in law and one nephew.

The family would like to give a special thanks to Peterson Hospice for their love and care.

Arrangements are under the direction and personal care of the professionals at Kerrville Funeral Home.
(830) 895-5111