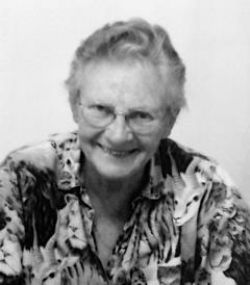 Cremation has taken place. As per her request, Barbara's ashes will be scattered next summer along with those of her husband Bill in the Wind River Range of Wyoming where she spent many summers with her daughter Pam, son-in-law Duane, and granddaughter Laura.

Barbara was born on May 3, 1929, in Brewer, Maine, the oldest daughter of Merton and Doris (Cimbollek) Foster. Barbara attended the University of Maine at Orono, graduating with a degree in Zoology. She married William (Bill) Duplisea on June 24, 1951, at the family camp, Camp Onarock, on the Penobscot River in Hampden, Maine.

They moved to Rochester, New York, where she worked for Eastman Kodak for several years, then stayed home to raise their children. In 1975, Barbara and Bill moved to Ft Collins, Colorado. In 1987, Barbara and Bill sold their home and spent five years traveling in their motorhome until finally settling in Center Point, Texas, in 1992 where she remained until her death.

A renaissance woman, Barbara was an accomplished quilter and seamstress who loved to appliqué and hand quilt works of art for family and friends. In 2011, Barbara's quilt "Little Brown Bird" took "Best of Show" and "People's Choice" awards at the Hill Country Quilt Guild Show at Schreiner University. She created and maintained beautiful gardens wherever she lived, and loved to cook. Along with her husband and children, they traveled extensively throughout the United States and Canada, hiking the National Parks, especially Big Bend. An avid bird watcher, she is credited with the first US sighting of the Tufted Flycatcher in Big Bend National Park, with recognition from the Texas Ornithological Society, American Birds magazine, and the National Audubon Society. With Bill at her side, they cherished the many people with whom they forged life-long friendships, especially while traveling.

She was preceded in death by Bill, her husband of 63 years; her parents, Doris and Merton Foster; brother, Richard Foster; and sister, Joan Vawter.

The family would like to extend their deepest appreciation to Dr. James Young and the staff of Peterson Hospice for their guidance, care, and compassion to Barbara during the past year and a half, and a most sincere thank you to Lisa Davis, RN, for her gentle understanding and care of Barbara during her time with Hospice.

In lieu of floral tributes, memorial donations may be made to Peterson Hospice, 1121 Broadway, Kerrville, Texas 78028, or to a charity of one's choice.

To order memorial trees or send flowers to the family in memory of Barbara Duplisea, please visit our flower store.
Send a Sympathy Card