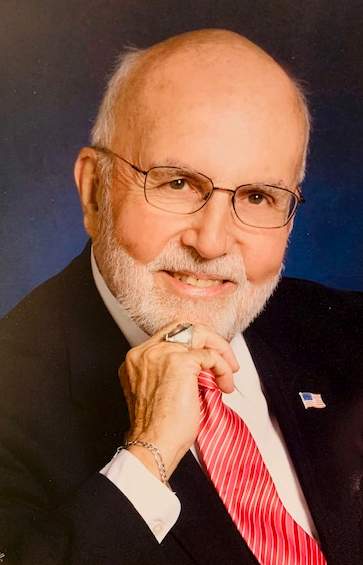 Beryl Merton Wright, 84, went to be with the angels and his Lord and Savior on Thursday, December 3, 2020.

Beryl was born to parents, Ollie and Lottie Wright at the Copper Queen Hospital in Bisbee, AZ on Feb. 16, 1936.  His father was a copper miner for the Phelps Dodge Mining Company for thirty years in Bisbee; and his mother was a homemaker.

Beryl loved sports and school choruses.  He played football, baseball, and threw shot put in track.  Beryl was on the AZ State Championship football team 1954 and 1955.  He played both offensive tackle and defensive guard.  After graduating from Bisbee High School, he attended Abilene Christian College and worked during the summers in the copper mine in Bisbee.  He finished his last year of college education at the University of Denver, earning a degree in Marketing in 1959.

Beryl served his country for ten years in the Air Force (Regular, Reserves, and National Guard). He met and married his wife, Carolyn, at the University Church of Christ in Denver, CO.  They celebrated their 58th anniversary August 31st of this year.  Beryl served as a deacon for the Northwest Church of Christ in Westminster, CO for 18 years. He also volunteered in multiple leadership positions with the Boy Scouts of America for many years. After retiring, Beryl and Carolyn moved to Kerrville, Texas where they have resided for the past 20 years.

He is preceded in death by his parents, Ollie Vernon Wright and Lottie Mae Wright and his two older brothers, Byron O. and Valdon E. Wright.

Beryl is survived by his wife, Carolyn; daughter, Danita Leese (Scott) who live in Thousand Oaks, CA; son Shawn Wright (Shanna) who live in Abilene, TX; and grandchildren Fletcher and Jenay Leese, Carson Wright, and step-grandson Jaxon Lenamon.  Beryl greatly loved his immediate and extended family,  he loved his caring and prayerful church family, and greatly enjoyed his time visiting with Veterans at the VA.

The family wishes to thank the doctors and nurses at Sid Peterson Hospital for their exceptional care.

In lieu of flowers please make donations to Arms of Hope.

To order memorial trees or send flowers to the family in memory of Beryl Wright, please visit our flower store.