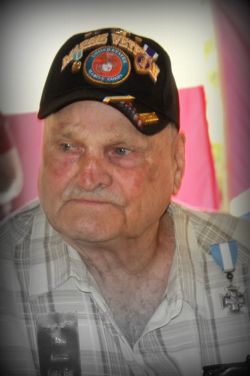 Billie spent most of his youth raising sheep and goats all over central and south Texas ranches with his family. He joined the United States Marine Corp from 1949 to 1952, and served in the Korean War, where he was one of the Chosin Few, receiving, Korean service medal, Presidential unit awards, and Purple Heart medals.

After returning from war he moved back to central Texas raised his family. He also go serious about calf roping, and for many years was a member of RCA, finally winning OTRCA world champion calf roper in 1983. Billie was well known as one of the best goat and cattlemen in the state.

Billie retired to his and Alma's ranch in Johnson City where they raised goats, sheep and exotic deer. Billie and Alma never turned down an orphaned animal. Grandchildren always thought it was like going to the zoo. Billie was an avid sports fan, loved watching baseball and football games on tv, and attending high school football games.
On most Wednesdays he was known to be a pretty tough moon (domino) player at the Old domino hall.

Billie was preceded in death by both of his parents, 1 sister, 7 brothers, and 1 son Billie Rae Rippy.

The family would like to thank the VA hospice of Fredericksburg, especially Desiree and Mario.
Immediately following the memorial all are invited to greet the family during a luncheon in the fellowship hall.