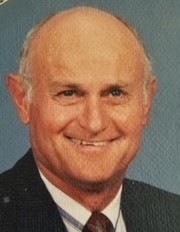 I struggle with trying to find words that will do justice to this precious soul known as; Mr. Akers, Bill, Billy, Chato, Dad, Daddy, Paw and Dude. Words seem to be inadequate from someone who was larger than life and so much to so many.

Unfortunately, the Lord decided Paw’s journey and service to His Will had reached its end. He was taken to paradise on, August 17,2021 where he was surely greeted by a host of angels. Hallelujahs were heard from afar as Paw entered those pearly gates. What a blessing for all as one of His own tried and true servants came to bow at his feet.

Our time with Paw was a great 89 years. We were extremely blessed with a faithful servant who guided his family on a path to a firm foundation in Christ. Dad served as deacon, superintendent, Sunday school teacher and song leader at both Trinity Baptist Church, Mirando City, Texas and First Baptist Church, Hebbronville, Texas.

Billy was married to the love of his life, three months short of 61 years. Until his departure, he adored that woman, often commenting how much he loved her and how lucky he was to have married such a beautiful woman. Although he was happily married for 61 years, Billy had “girlfriends” from as far away as England to right here in Leakey, Texas. Every female knew how much he cherished receiving and giving hugs.

Bill was blessed with three daughters. They adored their dad and vice versa. He was usually gone to work when they awoke and would for the most part return from work in time to have dinner with his family. He always made time for his girls. He finally gained three sons through marriage. He was eternally grateful to all three for relieving him of the financial burden of raising females. He loved his family! His greatest joy were his grandchildren.He loved those kids. He was a bit disappointed as they became adults. They were not quite as entertaining, but they did something very special for him. They gave him great grandchildren. Paw’s enjoyment was watching those kiddos dish-out havoc to their parents as they had him and BMa.

Aside from his family, Billy had many friends. Those nearest and dearest one’s were a group of men he was raised with from Mirando City. This tight- knit group of men began their friendship in first grade and remain friends to date. There are now only three remaining from the original group.

When Bill moved to the Hill Country, he quickly made a new group of friends. It did not take Paw long to gain the title of President of “The Liar’s Club”. Pre- Covid days, this group of very extra- ordinary men met every morning for coffee. New “stories” were added to his collection. It was not hard for Paw to make friends, for he never met a stranger. He made sure that anyone who entered his home was treated as family and felt as such.

One was immediately drawn-in by his welcoming smile, sparkling blue eyes, never-ending kindness, friendliness and humor. Once people met Paw, they were inclined to remain friends with him. What kept people “coming back” was his gifted ability to relay stories. His forte was telling tales that would make Mark Twain proud. He relished in entertaining people with his personal stories from childhood experiences, high school mischievousness to present day “senior moments”.

He loved telling his tales and re-lived them as he did. Those closest to him can tell these stories, by heart, as many have heard each one at least 100 times. Yet, one still enjoyed the tales and anticipated the well-known conclusion. He loved the smiles and laughs he received and Paw considered his job a success.

Faith, family and friends were a huge part of Billy’s life. He dedicated so much time to each. HOWEVER, nothing topped his pleasure of pure hard work. He loved operating his old, cherished, red pulling machine. If ever he came across someone who could relate to oilfield lingo, they were in for a vveerryy lloonngg conversation. He cherished his time spent in the oilfield and was quite good and successful at what he did.

He was Blessed. He was Humble. He was Genuine. He Loved Jesus. He was Soft Hearted. He was our Hero! He was simply The Best!

He will be truly and sorely missed. We love you Paw!

Visitation will be held on Monday, August 23, 2021 from 9-10:45AM at Frio Canyon Baptist Church in Leakey with funeral services beginning at 11AM.

Graveside Services will be held at 10AM on Tuesday, August 24, 2021 at Greenhill Cemetery in Hebbronville, Texas.

Bill’s family would like to extend a very special heartfelt “THANK YOU” to the 3rd Floor West nurses at Peterson Regional Medical Hospital, Kerrville, Texas. Special THANKS and BLESSINGS specifically to Summer, Eunice, Jessica and Rico!

To order memorial trees or send flowers to the family in memory of Billy Akers, please visit our flower store.
Send a Sympathy Card