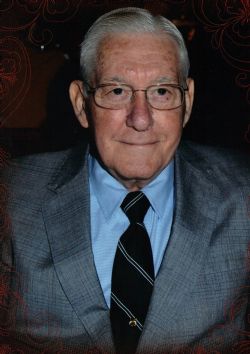 
Boyce Tomek, age 88 passed away Sunday, March 6, 2016 at a local hospital in Kerrville, TX.
Mr. Tomek lived a very simple life in Cove, Arkansas with his mother, Ella, father, Lewis, sisters, Joyce and Patsy and helped his family when his father would travel to different towns for work. In 1945, he enlisted in the Navy as a Seabee, building bridges, doing road repair and vehicle maintenance. Upon receiving his discharged, he returned to Wichita to work for Boeing Aircraft Company as a Supervisor of Tool and Production Planners until his retirement in 1983. He was highly regarded among his peers.
In 1950, Boyce married Naomi and in 1954 they purchased a ½ acre of land and built a house where they raised their only child Deborah. By the time Deborah was ready for school, the house was ready to live in.
Whenever time permitted, the Tomek family loved to vacation and rock hunt. Camping caravans took them through the deserts, mountains and plains, stopping at National Parks and throughout the Western States. There was always a campfire, a Forest Ranger's talk and my Mom's laughter. Boyce never met a stranger, only a new face to call a friend. He enjoyed silversmithing, rock hunting, jewelry making, stain glass making and carpentry.
After retiring from Boeing, they became ''Winter Texans'' for many years residing in Pedais, TX where he charmed all the ladies and learned to 2-step. He loved to play his guitar, snardrum, harmonica, sing, and listen to country music and the Beatles.
Boyce was a professional clown. ''KEMO-T the Magician'', riding his moped and pulling his calliope in parades. As Dietert Clowns, KEMO-T and his late wife Naomi, ''Sunny the Clown'', were greeters for shoppers at Wal-Mart, special events and put smiles on the patients at Sid Peterson Hospital. He loved life and was a 32nd degree Mason.
After Naomi died in 2003, months later eating lunch at The Dietert Center, Boyce met Maxine. Both widowers, he finally wore Maxine down and married her in 2010 gaining a wonderful daughter, Leanne and son, Loren. They loved to travel and took yearly trips up north to Indian River, Michigan, Branson and Springfield, Missouri. They loved to take bus trips with the Dietert group and even took a Hawaiian cruise and 2 Caribbean cruises.
Boyce would always end his day singing, ''Happy Trails to You'', then saying, ''Be Kind to Each Other'' and ''May the Good Lord Take a Likin' to You''.
Those left to honor and cherish his memory are his wife, Clarice ''Maxine'' Keltner Piper Tomek and her daughter, Leanne Piper Pease, his daughter, Deborah Westall and her daughters, Meliame Westall Vea and husband, Aisea, Jr., and daughter Anaseini, Saite Westall and her daughter, Teri Lynn and Leilani Westall, sister Patsy Singleton and husband, Joffree, her daughters, Caren Bond, Sharon Denton, Terry Dreiling and their families, nieces Donna Saliba, Brenda Schleif and their families, brother-in-law Raymond Davis and wife, Donita and their family, sister-in-laws Doris Davis Fry, Joy Davis Cooper, Jeanette Davis and their families. He was preceded in death by his parents, a sister, Joyce Tomek and Arther Chewning, brother-in-laws Earl Davis, Max Davis, Wayne Davis, Jerry Fry and step-son, Loren Piper.
Celebration of life services are under the personal care of the professionals at Kerrville Funeral Home and will be held 1 p.m. Saturday, April 2, 2016 in the Main Chapel of Kerrville Funeral Home with Reverend Sam Ligon officiating. Full military honors will be provided for by the Vietnam Veterans of America Honor Guard. The family will have a private interment.
The family request memorials made in his name to the Alzheimer's Association, 225 N. Michigan Ave, Floor 17, Chicago, IL 60601.
The family invites you to leave a message or memory at www.kerrvillefuneralhometx.com. Select obituaries, select ''sign guestbook'' at the top right of the individual memorial.
Arrangements are under the direction and personal care of the professionals at Kerrville Funeral Home.
(830) 895-5111.

To order memorial trees or send flowers to the family in memory of Boyce Tomek, please visit our flower store.
Send a Sympathy Card