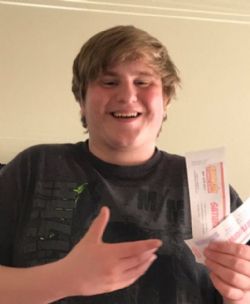 Carson was born August 7, 2000 in San Antonio, Texas to parents, Dustin Earl Green and Paula Jean Stevens. He was born into this world at a whooping 1 lb. 15 oz. He was a fighter from birth and continued that fight throughout the rest of his life. He spent his early years in Leakey and moved to Yoakum for a few years but began to thrive once he moved to Kerrville.

Carson loved to get lost in books, especially Percy Jackson! He loved learning about anything he found interesting which included marine wildlife, Greek mythology and Marvel and DC comics. He enjoyed spending time with his family, welding, swimming, eating shrimp and making his special spaghetti and the TIVY ANTLERS!!!!
Just like any teenager, Carson loved video games and if you were to argue which gaming system was the best, he would tell you X-Box hands down! His family was his most important treasure, he loved his parents and sisters whole heartedly and treated all his cousins and friends as if they were all his brothers and sisters.

In lieu of flowers, donations can be made to an account in Carson's honor Stacy Turner at Randolph Brooks Federal Credit Union 1801 Sidney Baker Street, Kerrville, TX 78028 to render financial aide for funeral expenses.

The family invites you to leave a message or memory at www.kerrvillefuneralhometx.com.