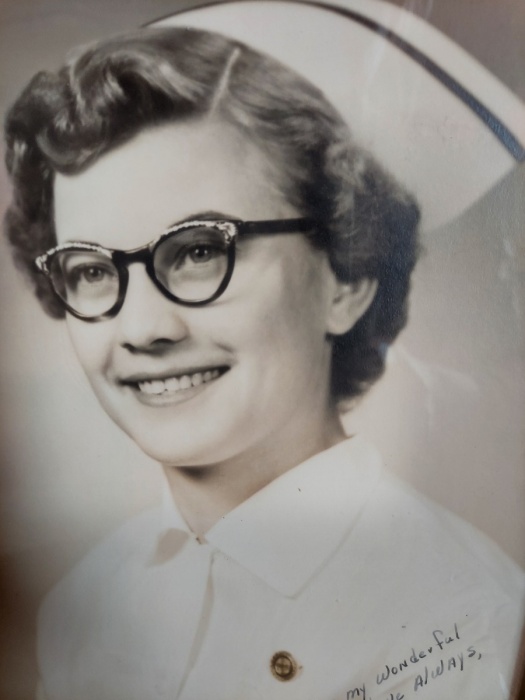 Charlcie Jane Hultman Hanna Vaughan was born in Clovis New Mexico on October 22, 1934. Her parents were Herbert Hultman and Charlcie McDowell Hultman. Jane grew up on a farm with three brothers in Eastern New Mexico near Clovis in the small community of Bellview, New Mexico. At age 17 after graduating from Bellview High School she attended North West Texas School of Nursing in Amarillo Texas and graduated with her RN diploma in 1955. She made lifelong friends in nursing school, who she cherished her entire life.

Jane married J. Weldon Hanna in May of 1955 and lived in Lubbock and Levelland in those early years. They had two children, a daughter, Sherri Jane Hanna Cooper and a son, Larry Jay Hanna. Jane worked as a Registered Nurse for 62 years in Lubbock, Levelland, Morton and Kerrville Texas. Jane worked at Levelland Clinic and Hospital in the 1960's and lived in Lubbock 1969- 1971 and worked for Dr. Monzar Attar, moved back to Levelland in 1971 and worked at the new Cook Memorial Hospital, where she worked into the1980's. She moved back to Lubbock, continued to work in Leveland and then continued her nursing career in home health care, long term care and University Medical Center in Lubbock before she retired the first time before moving to Kerrville to be closer to her daughter and her family. After a brief retirement, she continued her nursing career in long term care. Jane worked her last shift on her 82nd birthday. Her health had declined the past few years and spent time in rehabilitation centers including two in which she had worked - Hilltop Village and Alpine Terrace in Kerrville.

Jane is survived by her children, her daughter, Sherri Jane Cooper and her husband, Jack and their children, Jane's grandchildren, Alyssa, Andrea, Jacob, Jon and Josh, and great grandchildren Dominic, Zoe, Jaron and Garrett; and her son, Larry Jay Hanna and his daughter, Jane's granddaughter, Lauren, and many nieces and nephews. She was preceded in death by her parents and her three brothers, Herbert Hultman, James Hultman and Kenneth Hultman.

A special thank you from the family of Jane to all the nursing staff, therapists and supporting staff at Alpine Terrace Rehabilitation Center, Peterson Health including Peterson Hospital and Peterson Hospice and her physicians Dr. Chancellor, Dr. Berg, Dr. Given, Dr. Mitchell, Dr. Rensch, all the hospitalists and supporting staff, and the countless nurses and caregivers that cared for our mother these past few years.

Please join us in a Celebration of Life on Sunday April 25, 2021 at 4 pm at the Coming King Sculpture Prayer Garden in Kerrville Texas, right off Interstate 10 at 520 Benson Drive. Come as you are to this casual event.

To order memorial trees or send flowers to the family in memory of Charlcie Vaughan, please visit our flower store.
Send a Sympathy Card