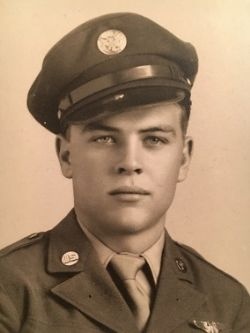 
Charles Thomas Woodard peacefully entered the gates of Heaven on December 10, 2017, surrounded by his children and grandchildren. He was 91. This tough and loving man was born to Oscar Farris and Willie Faye Woodard on May 28, 1926. Known as ''Woody'' to his friends and family, this man was once a real American cowboy. Woody grew up on a working ranch near Brady, Texas where he spent his days raising cattle, wrangling rattle snakes, and riding broncs. During World War II, Woody could be found in the belly of a plane where he trained for the dangerous position of a ball turret gunner. After the war, as he was walking on the campus of Tarleton State University, Woody spotted a long-legged brunette through a window. It wasn't long until the beautiful Carol Lee Dawson became his bride. In 1948 the couple wed, and in 1950 they moved to Kerrville, where they raised their children, Karen and Mike. During his long life in the Texas hill country, Woody worked hard at any job he put his hands to. In his later years, he would proudly talk of his long tenure with the Texas Highway Department. It was during this time that he worked as a dedicated engineer, overseeing the construction of Texas's state highways. For a time, Woody enjoyed competing in archery, shooting alongside his best friend Homer Dyess. The kids remember playing in the woods as Dad shot targets nearby. His two children grew up and had families of their own, but Woody got such a kick out of spending time with his grandkids. He took them to the nearby rivers to play, taught them about fishing, and taught them to love cooking and eating! Hearing their voices say ''Woody'' was one of the sweetest sounds to his ears.
After retirement, Woody could most often be found ''piddling'' around his shop, where his gifted hands would craft all sorts of things. He was an inventor, and loved to make things work. But most of all, Woody loved to work with wood. He passed the gift of woodworking down to his son and grandsons, and perhaps on to his great-grandsons!
Woody and his bride, Carol, were married for 56 years until her passing in 2005. He would always say he would never find another love like hers. The couple enjoyed once-a-week meals shared with Woody's brother and sister-in-law, Curtis and Loraine Woodard of Fredericksburg. They would meet each week to dine, and this gathering continued even after the passing of both of their beloved wives. A proud father, Woody enjoyed every single visit and call he received from his children and grandkids. His daughter, Karen remembers him ending each day's phone call with ''Don't forget...I love you.'' It was their secret language. Woody truly adored her caring ways. He also loved to share his favorite recipes with his son-in-law, Gerald. Especially during the last 6 months of his life, Woody got to spend large amounts of time with his son, Mike. This meant the world to him.
When asked about living life, Woody was quoted as saying, ''I don't know what's going on half the time. I just grab on to a coat tail. I don't have to worry about anything except hanging on!''
Woody loved Jesus, and was not ashamed of his faith in God. He and his wife Carol were faithful members of The First Christian Church in Kerrville since their arrival to the area in 1950. During his time there, he served as a deacon and then later, as an elder.
Woody absolutely, without any doubt, would say his proudest accomplishment was his family. He gave love liberally and received it back in the same fashion. He will be deeply missed, as there are not many men who can love so greatly and yet be ''tougher than a two-dollar piece of leather.'' His family is blessed to know that he is now reunited with his beautiful wife, Carol Lee, as they walk hand-and-hand on streets of gold.
Charles Thomas Woodard is survived by his younger brother, Curtis Woodard of Fredericksburg; his daughter and her husband, Karen and Gerald Stewart of Spring; his son, Mike Woodard of Kerrville; his grandchildren, Wick (Amy) Thomas, Kim (Ben) Strebeck, Christa (Johnny) Rodriguez, and Chase (Anna) Nesbitt; and his great grandchildren: Charley, Cooper, and Cora Lee Thomas; Benjamin and Ethan Strebeck; Natalie, Kaeden and Kinsley Rodriguez; Emma and Ayla Nesbitt.
Memorials can be made to the First Christian Church in Kerrville, Texas.
Arrangements are under the direction and personal care of the professionals at Kerrville Funeral Home. (830) 895-5111.


To order memorial trees or send flowers to the family in memory of Charles Woodard, please visit our flower store.