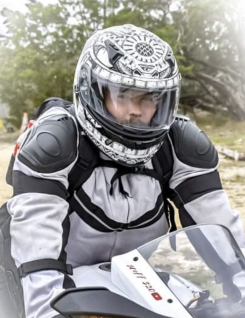 Connor Montgomery Worsham Richter, 25 of Kerrville, Texas passed from this life on August 22,2021 in Uvalde, Texas. He was born on February 21, 1996 in Kerrville to parents, Todd Anthony Worsham and Stacey Lynn Richter.

Connor attended Tivy High School for three years, where he was involved in ROTC, color guard, baseball, skateboarding, BMX bikes, playing guitar and keyboard. He graduated from Victoria high school in 2014. Connor enlisted in the United States Army at the age of seventeen and left for training upon graduating. Connor served his country proudly for three years which included one combat tour. Following an honorable discharge from the Army, he attended college in New Mexico, from there he moved back to Kerrville to be closer to family. In Kerrville, He met his now fiancé, Autumn and the mother of his two daughters, eight-month-old Elena Grace and unborn Kendall Montgomery due in February. Before his passing Conor aspired to help his community by joining the Kerrville Police Academy. Some of his favorite things to do were working on and riding motorcycles. Conor was the founding member of the riding group “Kerrville Bikes.” He loved anything to do with PC gaming. Connor also loved fishing and being outdoors as well as spending time with family and friends.  He was always there to help anybody in need. Connor departed this earth doing what he loved. He would always say” If I’m gonna go out, im gonna go out riding.”

He is preceded in death by his father, Todd Anthony Worsham and his maternal grandparents, Chester and Sharon Richter.

A Memorial Service will be held at 3PM on August 28,2021 at Kerrville Funeral Home.

To order memorial trees or send flowers to the family in memory of Connor Worsham Richter, please visit our flower store.