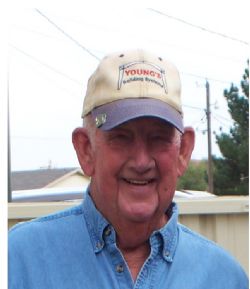 
Curtis Witt, 78, passed away at Sid Peterson Memorial Hospital, in Kerrville, TX on August 26, 2016. Prior to moving to Kerrville in 2013, he was the owner of Basin Candy and Tobacco Company in Midland, TX.
He is survived by his wife, Gene, of Kerrville, his daughter Paula Witt Williams and husband Donal, his sons Dee Witt and wife Kathy, Chuck Witt and wife Carmen, all of Odessa,TX and JimAnn Mosley of Tuscon, AZ, step-sons Scott Akers and wife Shelly of Alpine,TX and Steve Akers and wife Kristin of Boerne, TX, seven grandchildren, two great-grandchildren, sister Linda and husband Ray Kyler of West Virginia and the mother of his children, Patti Witt of Odessa, TX.
He is preceded in death by his mother and father, LD and Mary Helen Witt, Sister Patsy Couch, Brother Jerry Glen Witt and favorite aunt, Pansy Johnson.
Curtis was born in Celeste, TX, on November 24, 1937, to LD and Mary Helen Witt. He attended Odessa High School and served in the US Marine Corps Reserves. He owned a racing team sponsored by Basin Candy and Tobacco Co. and U.S. Tobacco. He was affectionately known as, ''The Candy Man''. He served as an officer for the Texas Association of Wholesale Distributors and received the 1988 Candy Distributor of the Year Award from the National Candy Wholesalers Association.
He was an avid golfer and played in several semi-pro tournaments. Curtis enjoyed time spent feeding and watching wildlife at Witt's End in the Turtle Creek Community. He was a proud member of Turtle Creek Community Church and cherished his church family.
A memorial service will be held on Saturday, September 3, 2016 at 10:00 a.m., at the Turtle Creek Community Church in Kerrville, TX. A celebration of Curtis' life will be held at Witt's End after the service. The family requests that, in lieu of flowers, donations be made to the building fund for the Turtle Creek Community Church, 130 Molina, Kerrville, TX 78028.
Arrangements are under the direction and personal care of the professionals at Kerrville Funeral Home. (830)895-5111.

To order memorial trees or send flowers to the family in memory of Curtis Witt, please visit our flower store.
Send a Sympathy Card