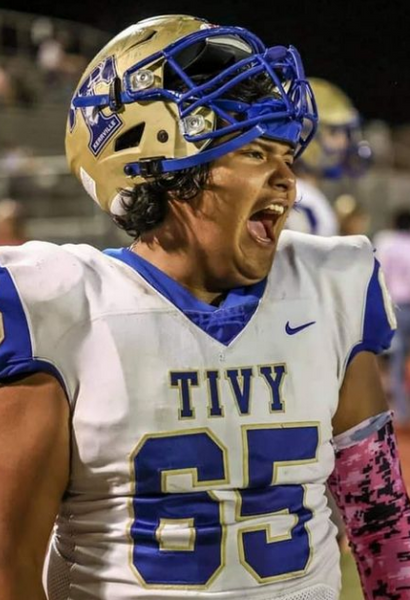 David Palmer Palestrant passed from this life on Thursday, November 4, 2021.

He was born on June 25, 2004 in Guatemala City, Guatemala. He joined his forever family in Ft. Myers, Florida, on January 18, 2005—his “gotcha” day. He was the beloved son of Mike and Doreen Palestrant, and they moved as a family to Kerrville in July of 2009 so David could attend Kerrville public schools.

During his early years, David loved playing with Legos and Nerf guns. He accomplished the rank of a third-degree red belt in karate. He also played Kerrville Little League t-ball and baseball. It was football, however, that became his passion. Whether he was playing, watching, or supporting his teammates on the sideline, David was fully engaged with football. He loved being a Tivy Antler, and was extremely proud to be called one. He was set to graduate with the Tivy class of 2022 this spring.

David will be remembered for his boisterous entrances to the room, his spirited personality, his goofy sense of humor, his infectious smile, his dark head of curly hair, and his love for dancing, singing, and freestyle rapping. He nurtured everyone he cared about. He never met a stranger. And he was proud to be a “Mama’s boy.” David’s advice to us all was to Always stay positive. Live life to the fullest. “You Gotta’ Be Big.”

David is preceded in death by his grandparents, Edward and Dorothy Carney, and Dr. Munroe and Muriel Palestrant and uncle Robert Carney.

The family asks that in lieu of flowers, donations can be made to the Tivy Athletic Booster Club.

Funeral services will be held at 11am on Saturday, November 13, 2021 at First United Methodist Church, 321 Thompson Street. A reception will follow in fellowship hall after the service.

To order memorial trees or send flowers to the family in memory of David Palestrant, please visit our flower store.