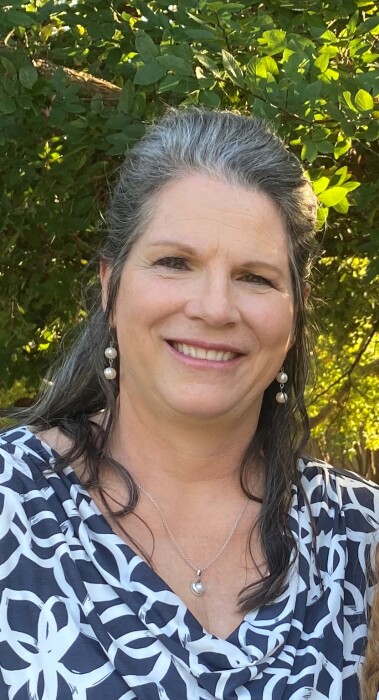 Deanna Marie Bernard McConniel, 55, of Kerrville, TX passed from this life on April 2, 2021 at a local hospital.

Deanna was born June 2, 1965 in Berkley, CA to David Czarnecky and Sue Griffiths.  She grew up in San Juan Capistrano, CA and Clarence, NY where she graduated high school.  She attended Grove City College in Grove City, PA where she received her bachelor’s degree in literature and communication arts. In college, she excelled at theater where she was a member of the national theater honorary group, Theta Alpha Tau; The Crown and Scepter, an academic honorary group for Sophomore women; and Clowns for Christ a Christian performing arts group.  After college, she worked for Putnam Publishing Company in New York City, and she edited a book.  She married Dr. Jack Bernard on July 21, 1990.  They lived together in Athens, TX where they raised 2 children.  Deanna was active in the community volunteering for the Family Peace Project, a family and battered women’s shelter.  Deanna was a devoted wife and mother who supported Jack’s career.  In 2011, Jack’s career brought the family to Kerrville where Deanna remained active in the community and in the service of others.  She was involved with local politics, her children’s schools, charitable work, and was a member of Impact Christian Fellowship. She also worked at the VA call center for 4 years. Deanna’s husband, Jack passed away on May 24, 2015.  While remaining active in the church community at Impact, Deanna met Scott McConniel in 2019, they were married September 26, 2020.

Deanna is preceded in death by her mother, Sue Griffiths; and first husband, Jack Bernard.

Visitation will be held 5-7:00 PM, Thursday, at Kerrville Funeral Home.

Memorials may be made to MD Anderson or the Family Peace Project.

To order memorial trees or send flowers to the family in memory of Deanna Bernard McConniel, please visit our flower store.