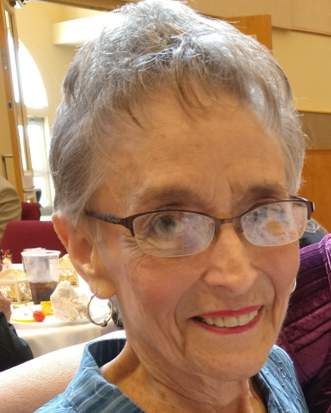 Donna was born January 16, 1938 to Lloyd and Verna Foster Snow in Chicago, but came to Texas as fast as she could, graduating from Lamar High School in Houston and entering her freshman year at the University of Texas Department of Drama in 1955. She graduated in 1959 with a degree in Children’s Theatre and that same year married Texan Donald E. Robinson, a neural scientist who had just finished the second of his three degrees at UT.

Once Don received his Ph.D. from UT, the Robinsons moved to Bloomington, Indiana, where Don became a professor of experimental psychology at Indiana University and Donna became a founding member of the Puck Players Puppet Theatre, which premiered in 1967. The troupe performed weekly in the falls and winters at the Monroe County (Bloomington) Public Library, and at schools, churches, and libraries throughout Southern Indiana, and sometimes even farther afield. In 2000, when Don and Donna retired back to Texas, the Theatre was in its 33rd year, and lasted 13 more before shuttering in 2013.

As a lifelong learner, Donna returned to college and earned her Master’s degree in radio-tv-film (RTF) from Indiana University in 1977. During her studies, she spent time as TJ Bookworm, a character voice on WFIU radio, doing book readings and review for children.   Because of her background in puppetry, she had a TJ Bookworm puppet that she brought with her…to work on radio.  She then took a key position as a fundraiser, working for the IU Foundation.  She also worked for a time at the Bloomington Animal shelter in promotions, allowing her to continue to express her strong love of animals.

Throughout her life, Donna volunteered for many organizations in Bloomington and Kerrville.  It was very important to her to help others; to help the arts, to help animals, and to find those areas of her world that needed her kind, insightful, caring, assistance. This included her tireless work to help establish the Waldron Center for the Arts, her work with the League of Women Voters, various church activities (Both at the Unitarian Universalist Church and the Unity Church) and many other organizations throughout the years.

After Don passed in 2010, Donna was blessed to have a second chance at true love when she met Carlton Burton.  They married in 2016 and were truly soul mates to the end and beyond.

To allow young voices to continue in theater, as her grandson Connor Andrew Robinson Barr has, Donna endowed the Snow-Robinson-Barr Family Scholarship at her alma mater, which contributes to resources for students of the Department of Theater and Dance (the current name for what Donna knew as the UT Department of Drama). She said she wanted to provide for all types of theater majors “whatever their path may be: performer, director, playwright, costumer, designer, technician, educator, historian, dramaturg, or some other theatrical interest still to be defined.”

A memorial service will be held October 1, 1:00 pm, at Unity of the Hill Country Church in Kerrville, Texas, where Donna enjoyed a large family of faith. Donations in Donna’s name are welcomed and can be made to the charity of your choice. Some of her favorites included the Myelodysplastic Syndromes Foundation, Kerrville Pets Alive, Best Friends Animal Society and, of course, the University of Texas Department of Theater and Dance.

To order memorial trees or send flowers to the family in memory of Donna S. Robinson, please visit our flower store.