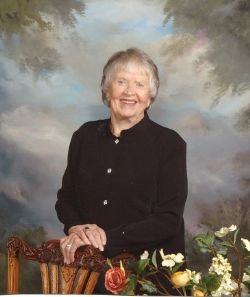 
Dorothy McNeil Tucker, philanthropist, who died in Kerrville on Saturday August 12, 2017. She was born in Racine, Wisconsin, September 1, 1923, the daughter of Frank J. and Bess Phillips McNeill, a prominent Wisconsin banking family.

Dorothy graduated from Washington Park High School, Racine, WI, as class Salutatorian, in 1941. She entered the University of Minnesota in 1941, and, during her senior year (1944-45), served as President of the Panhellenic Association and President of the Senior Cabinet, Class of 1945. She received the following degrees:
B. S. - 1945, University of Minnesota; M.S. - 1949, Illinois State University, and Ed.
D. - 1959, U.C.L.A., with doctoral areas in counseling psychology and higher education. She was a licensed California psychologist. Her professional memberships included the American Psychological Association and the American Association of University Professors. She was selected to membership in Who's Who in the West, Leaders in Education, Community Leaders and Noteworthy Americans, Pi Gamma Mu, Pi Lambda Theta, Eta Sigma Epsilon and Delta Kappa Gamma.

Her varied interests included service on the Personnel Board, City of West Covina, CA, for 10 years, and membership on the Citizens' Advisory Board of the City of West Covina. She also served on the Boards of Directors of Pomona Valley Mental Health Association, Edgewood Family Counseling Agency, East Hills Home Owners Association, and South Hills Country Club Women's Golf Association for eight years, including two years as chairman. From 1994 until 2006, she served as a member of the Board of Trustees, University of Minnesota Foundation. No longer flying up to Minneapolis four times a year, she was able to serve on two Boards in Kerrville: The Dietert Center and ECW (Episcopal Church Women) at St. Peter's Episcopal Church.

Dorothy McNeill married Elbridge Ashcraft Tucker on November 26, 1958, in West Covina, CA, where they resided until after they both retired in 1974. After retirement, they traveled in Europe and Asia, usually with a golf safari group. Although Ed didn't enjoy golf, he was the official photographer and enjoyed retiring to the Country Club Board Rooms with the local Board Members and learning from them about their countries, while Dorothy was golfing. Dorothy felt very lucky to have had six hole-in-ones, at three different California private golf courses, during her golfing years.

The Tuckers left California in 1987. At that time, they donated their extensive Indian collection of rugs, jewelry, paintings, and pottery to the Red Rock Museum, in Red Rock State Park, east of Gallup, New Mexico. They continued their philanthropic endeavors in Kerrville, starting with the donation of the electronic bells and a stained glass window in the chapel at Hill Country Youth Ranch. Schreiner University was also on their donation list. They became members of the St. Peter's Episcopal Church, Schreiner University Oaks Society, and Riverhill Country Club. Dorothy, at one time, belonged to the Riverhill Women's Golf Club, Riverhill Women's Association, Kerrville Duplicate Bridge Club, and Hill Country Duplicate Bridge Club.

Her husband preceded her in death on October 21, 1991. In his memory, she donated a 25" high bronze sculpture by Beverly Seamans, "A Child Shall Lead Them," to the Doheny Eye Institute Building, in Los Angeles, CA. And, like Churchill's foot, visitors and patients pat the young boy's head as they pass the sculpture.

Dorothy, known as Mickey to her high school and university friends, decided she had lived in Kerrville for more than 20 years and she should do more for her adopted hometown. Thus, she funded the new Parish Hall at St. Peter's Episcopal Church. The Parish Hall was completed in February of 2006 and named "Tucker Hall." She funded the new Dietert Center Lobby in memory of her husband, and also funded the "Take Five" Activity Room. Dorothy realized that she had lived a very fortunate life and wanted to live it so her life would make a difference to future generations. Always a lover of cats, especially her Silver Tabbys, Big Boy and Little Girl, and Sweetie, she supported many animal welfare organizations, her favorite being Best Friends in Utah.

In May 2006, the College of Education and Human Development at the University of Minnesota celebrated their 100th anniversary at an elaborate banquet. One hundred distinguished alumni were selected and honored at this event. Dorothy was one of the alumni so honored.

Although she outlived her immediate family, several close friends across the United States combined to write this obituary. We will all miss her - a cheerful, scintillating, and fun loving person.

In lieu of flowers, a come and go reception and celebration of Dorothy's life will be held in Tucker Hall at St.Peter's Episcopal Church on Friday September 1, 2017. Between 5 and 8 PM please come share a Dorothy story and contribute to Dorothy's favorite charities, the Dietert Center, St. Peter's Episcopal Church, Schriener University, or the Hill Country Veteran's Center.


Arrangements are under the direction and personal care of the professionals at Kerrville Funeral Home (830)895-5111.