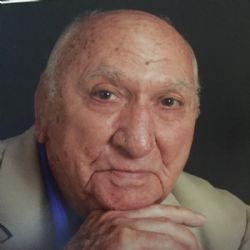 A resident of Center Point, Texas in retirement, Ray leaves behind his beloved wife of 63 years, Mary Lou Bowen Jones. Their blessed union leaves numerous family members to cherish his memory. He is survived by his three children and their spouses - Timothy Ray Jones (Mary Ann) of Hutto, Thomas Edward Jones (Tracy) of Kerrville and Debra Ann Mays (Harry) of Boerne, as well as one sister - Wanda Faye Hair of Deer Park. Ray is also survived by seven grandchildren and seven great-grandchildren as well as numerous nieces and nephews.

Ray was born to Dorris Floyd Jones and Zula Mae Lanningham Jones in Buffalo, TX. on July 5, 1933. His parents predeceased him, along with sisters Dorothy Mae, his infant twin, and Helen Love Lockey of LaMarque, TX., along with one great granddaughter Joanna Jones.

Ray's working life included employment with Lockey Plumbing Company, Ford Motor Company, State of Texas Highway Department, and the City of Pasadena (Public Works Department). He and Mary moved to the Hill Country in 1992 upon retirement from the City of Deer Park (Public Works Department). Not willing to be idle, he started T and R Stump and Cedar Removal with his son Tom and worked on many ranches and properties throughout the Kerrville area for the next several years.

Ray was a Servant of Christ from a young age, raised a Southern Baptist. He and his family attended Trinity Baptist of Kerrville at the time of his death. Ray was a Member of the Masonic Grand Lodge of Texas for over 50 years.

The Jones Family will receive visitors at Kerrville Funeral Home 1221 Junction Hwy Kerrville, TX 78028 on Wednesday December 7, 2016 from 6 to 8 PM. A celebration of Ray's life will be shared starting at 11 AM, Thursday, December 8, 2016 at Trinity Baptist Church, 800 Jackson Rd. Kerrville, TX 78028. Pallbearers will be Grandsons and Great Grandsons.

Interment will be held at the Buffalo Cemetery in Leon County, TX. The Masonic Lodge # 554 will conduct a traditional full Masonic Burial Service at 10 AM, Friday, December 9, 2016.

In lieu of floral tributes, contributions in Ray's name are welcome at The Shriner's Hospital For Children (http://www.shrinershospitalsforchildren.org).

To order memorial trees or send flowers to the family in memory of Dorris Jones, please visit our flower store.