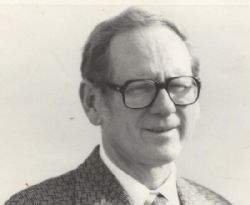 
Earl Richard Kohlman, 91, of Kerrville, Texas passed away Monday February 5, 2018. Earl was born May 10, 1926 in Iowa Park, Texas. He graduated from Electra High School in May of 1942 and attended college for a short time before volunteering for service in the U. S. Navy. He served in the Pacific Theater as a radio man on the aircraft carrier USS Langley (CVL27) until June 1946.
After World War II, Earl attended North Texas College (now University of North Texas), graduating in May 1948. While there he met his future wife, Rubye Jo Smith of Stephenville, Texas. A year later they were married on May 29th in Eunice, New Mexico and went on to enjoy a wonderful life of 65 years together.
Earl worked for Stanolind Oil and Gas Company for three years before moving to Halliburton. He held various positions with them throughout the country. These included a stint on the North Slope of Alaska, and a lengthy assignment to the Nevada Nuclear Testing Site. He finished his career as a safety training supervisor/instructor in Big Spring, Texas.
Earl retired from Halliburton in 1986, in 1990 he and Ruby Jo moved to Kerrville Texas. They enjoyed traveling throughout the United States with close friends towing their campers, highlighted by a lengthy trip to Alaska. They built a cabin in the mountains outside Red River, New Mexico, enjoying the beautiful scenery and many activities. Always active in the Methodist Church, Earl served on the official boards during construction of churches in Wichita Falls, Texas and Las Vegas, Nevada. Earl's been a member of St. Paul's Methodist Church in Kerrville since 1990, serving as an usher while his health allowed.
The love of his life, Rubye Jo passed away in 2014. The devoted couple leaves behind 2 daughters, a much loved son in law, three grandchildren and four great-grandchildren.
Services will be held for Earl Thursday February 15, 2018 at 10:00am at St. Paul's United Methodist Church. A reception will follow at the church. The family requests that in lieu of flowers a donation be made to the St. Paul's United Methodist Church, Kerrville, Texas 78028.
Arrangements are under the direction and personal care of the professionals at Kerrville Funeral Home. (830) 895-5111