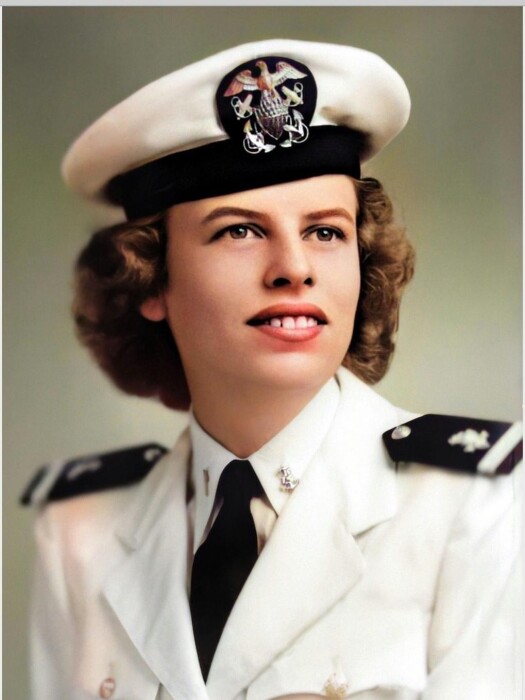 Emma Newman, 95, of Kerrville, Texas, died on June 9th, 2021. She was born Emma Ruth Partridge in April 1926, at home, in Spur, Texas. Emma was the only child of Albert Partridge and Julia Watley. Emma’s father was killed in a car accident in 1931 and her mother later remarried Jeff Stewart.

Emma attended Marathon High School while living as a boarder at the Gage Hotel. Class valedictorian of 1943, she hopped on a train to San Antonio and joined the US Cadet Corps to be trained as a registered nurse. Here she adopted the name, “Sallye” and it stuck for the rest of her life.

After World War II ended, she stayed in the Navy as a surgical nurse. In 1949, Ensign Partridge married Lt. Pierce Phillips Newman, Jr., in Houston, Texas, on the grounds of the naval hospital, now known as the Michael E. DeBakey VA Medical Center. Emma resigned her post but remained in the Navy Reserves until 1955. The Navy sent the young couple to some great duty stations including Pearl Harbor, Key West and New London, Connecticut. In 1950 Emma drove from Texas to San Francisco with her beloved cocker spaniel, Susie, to catch the ship to Hawaii. She met many people along the way that she kept in contact with for years. After the Korean Conflict, the couple moved to Galveston for Phil to finish his medical residency. Emma spent years restoring a Victorian house on Ball Street. Their oldest child, Pierce Phillips Newman, III, now of San Antonio, was born here.

In 1959, the couple moved to Lake Charles, Louisiana, where their younger children were born. Elizabeth Anne (Goodrich) of Georgetown, Texas, Amy Margaret (Harwood) of Austin, Texas and Albert Partridge of Flagstaff, Arizona. Emma moved to Kerrville in 1980 and later began working at the State Hospital.

Emma was a talented seamstress, quilter, furniture restorer and had a sharp eye for color. She left her family a treasure trove of handmade gifts. Emma was a breast cancer survivor. Emma had a special affinity for corgis, beginning with her beloved Blossom in 1971. Despite her dislike for swimming, Emma spent many hours poolside, and on the road, as a swim team mom.

In addition to her children, Emma leaves five grandchildren, John Brewer and Bryce Phillips Goodrich; Samantha Elizabeth, Katherine Mackenzie and Adelaide Sanford Harwood, and two great grandsons, Jackson and Jameson Goodrich. Although she would never admit it, Emma was blessed to have two sons-in-law complete her family, Robert Goodrich and Sandy Harwood.

A memorial service will be held at Ft Sam Houston in San Antonio, Texas on Tuesday July 6,2021 at 2 PM. Emma will be interred with full military honors. The Rev. Bert Baetz of St. Peter’s Episcopal Church in Kerrville, Texas will officiate.

Please consider a memorial to the National WWII Museum in New Orleans, National Museum of the Pacific War in Fredericksburg or the Alzheimer Association.

To order memorial trees or send flowers to the family in memory of Emma Newman, please visit our flower store.