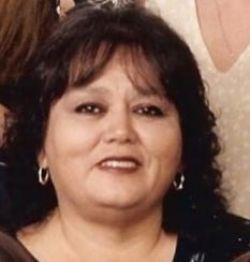 
Ernestine(Tina/Teeny) Arredondo-Martinez entered into eternal peace on Saturday, March 11, 2017 at the age of 66. Her devotion to her family and her firm belief in God, supported her in her struggle and ultimately gave her peace. Tina was born in Kerrville, Texas on June 23, 1950, the daughter of the late George R. and Alice M. Arreola and was the eldest of four children. Tina was a loving and devoted wife, mother, grandmother, sister and friend, always putting others before herself. She had the most generous and loving heart and she touched many lives with her presence. Her family and friends will always be thankful for the gift of her life and the wonderful memories she left behind.

Tina accepted Christ as her Lord and Savior at the age of 30 and lived her life enthusiastic to ministering and caring for others. Throughout her life Tina lived in Kerrville, Fredericksburg, San Antonio and Monterrey, Mexico. Tina was exceptional at all that she endeavored, she held management positions in IT and healthcare reimbursement while working in the U.S. During her 14 years in Monterrey, Tina lived with her husband Mauro A. Martinez and two youngest sons. While there, Tina dedicated the majority of her time ministering and spreading the Word of God to those around her. Tina was a founding member of one of the first Christian churches in the Apodaca Colonia. Tina's devotion to Christ was evident in all aspects of her life, no matter the occasion her faith steered every conversation to a meaningful verse or scripture she needed to share.

She was preceded in death by her parents, George and Alice; her brother and sister-in-law Eddie and Linda Arreola and her beloved niece Melissa A. Arreola. Together they are dancing and rejoicing in heaven as they watch over us on earth.

In honor of Tina's wishes a cremation by Kerrville Funeral Home will take place, with services honoring her memory held on Saturday morning from 11:00 am to 12:00 pm at 1221 Junction Highway, Kerrville, TX 78028.

The family believes that when someone passes, their life does not end but rather changes. We know that Tina has reached a place of everlasting peace alongside Jesus Christ. While we grieve her passing, with our grief comes the lightness of hope.