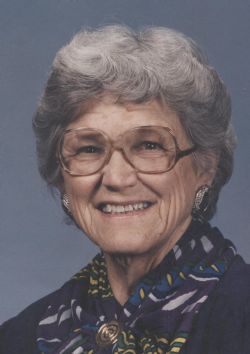 
KERRVILLE - Louise LeMeilleur, 96, of Kerrville, Texas, passed from this life at a local care center on February 4, 2016. She was born in Ft. Stockton, Texas on September 21, 1919 to Louis and Blanche Graham. Louise married Charles Raymond LeMeilleur on January 7, 1943 in Roscoe, Texas.

Louise went to Roscoe High School and then graduated from Shannon School of Nursing in San Angelo, Texas as an R.N. She was a nurse for 50 years and was also a member of The Kerrville Church of Christ for 70 years.

A time of visitation and reflection will held at Kerrville Funeral Home, 1221 Junction Highway, Kerrville, Texas from 5 - 7 PM, Monday, February 8, 2016.

Celebration of Life Services will be held at the Kerrville Church of Christ, 1900 Loop 534, Kerrville, Texas 78028 at 3 PM, Tuesday, February 9, 2016 with Greg Cummings, Minister, officiating.

The family wishes to extend their sincere thanks to Dr. James Young, the nurses and CNA's at Hilltop Village, Peterson Hospice, along with special friends to Louise, Ann Robertson, Laura Harbin, and Debbie Priour.

In lieu of floral tributes, the family asks that memorial contributions be made to the following organizations: Arms of Hope, 21300 State Highway 16 North, Kerrville, Texas 78028, Christian Outreach to Northern Ghana, 136 Spicer Loop, Kerrville, Texas 78028, or consider donating blood to the South Texas Blood and Tissue Center as Louise had done for many years.

To order memorial trees or send flowers to the family in memory of Etta LeMeilleur, please visit our flower store.
Send a Sympathy Card