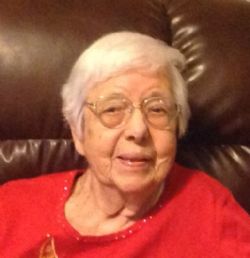 
Frances M. Schwandt passed away at 96 1/2 years old on July 30, 2017 at 220 Harper Road assisted living. She was born January 12, 1921 to Nick and Leah (Moser) Buri and lived in rural Milbank, SD. She taught in a one room schoolhouse until she met and married Gerhardt Schwandt on June 28, 1942.. They were married in the Little Brown Church in the Vale in Nashua, IA. Their daughter Audrey came to live with them in February, 1953. Frances was a farm wife and active civic and church member. In 1965 she and Gerhardt moved to St. Paul where she took up the new profession of nursing assistant at Midway Hospital. This profession would be her true calling as she had empathy and the caring spirit for all. In 1978 they moved to Kerrville, TX and she continued to work as a nursing assistant at Sid Peterson Hospital. They spent a brief time in Menard, TX but returned to Kerrville when Gerhardt's health failed. They were members of Holy Cross Lutheran Church where she enjoyed honing her entertainment skills for various church activities. Gerhardt died in April of 1990. She then became an occasional "house sitter" and nanny to several young people in the area. She was a strong and independent woman. September 2008 she made the decision to enter assisted living at 220 Harper Road, the staff and residents of which became her second family.

She was preceded in death by her parents, her husband, sisters Mabel Stowe and Nora Netzel; brothers Paul and Aaron Buri. She is survived by her daughter Audrey Watson, son in law Larry Watson, grandson Billy Watson and her feline companion Samantha.

Memorial service will be at the Kerrville Funeral home Friday, August 4, 2017 at 1:00PM with visitation one hour prior to the service. Burial will be in the Garden of Memories cemetery, Kerrville. In lieu of flowers the family requests memorials be directed to the Humane Society.

Arrangements are under the direction and personal care of the professionals at Kerrville Funeral Home. (830) 895-511.