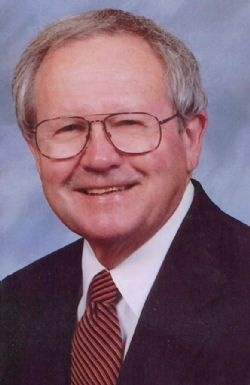 
Franklin William Maresh, 79, of Hunt, TX. passed away peacefully on Tuesday, October 2, 2018 at a local care facility in Kerrville, TX. with his children near him.
He was born on Oct. 22, 1938 in Caldwell, TX. to Adele Louise Kaltwasser Maresh and Frank William Maresh. He graduated from Caldwell High School in 1957. Frank then attended The University of Texas at Austin earning a B.B.A. with Honors in Accounting and a Masters of Professional Accounting with Highest Honors. While at The University, Frank joined Kappa Alpha Order and Silver Spurs Service Organization, and served as President of the McCombs School of Business student body. In 1959, Frank married Mollie Burnham, of Houston, TX. Upon completing his Masters degree in 1962, Frank joined Peat Marwick Mitchell (subsequently KPMG) in Houston. He spent more than 30 years with KPMG, during which time he served on the Board of Directors, as Managing Partner of the Houston office and Southwest Region of the U.S., and Vice Chairman of the Firm.

Frank served in numerous leadership roles in the Houston community where he could make a difference. Among those include Houston Museum of Natural Science, Museum of Fine Arts Houston, Greater Houston Partnership, Easter Seal Society, Wortham Theatre Center, Alley Theatre and Central Houston, Inc. Boards of Directors. He proudly supported The University of Texas and gave his time and expertise in many capacities, including the McCombs School of Business Advisory Council, College of Business Administration Foundation Advisory Council, and Department of Accounting Advisory Council. He was recognized as Distinguished Alumnus of McCombs School of Business and inducted into the University of Texas Business Hall of Fame. Frank was appointed by Governor Ann Richards to the Texas State Board of Public Accountancy where he served as Chairman. His years of dedication to Kappa Alpha were commendable and he served on the Board of Directors as Chairman of the Kappa Alpha Foundation and Texas Omicron Educational Corporation. After retiring from KPMG in 1993, Frank directed his business endeavors to private equity investments and operating companies. He and Mollie moved to Hunt, TX., where he continued his commitment to help others and local organizations thrive. Frank served on the Schreiner University, First United Methodist Church of Kerrville Foundation, and Peterson Health Foundation Boards of Directors.

Frank and Mollie were incredibly devoted to each other and enjoyed a beautiful 57 years of marriage until she passed away in 2017. Frank was known for his business acumen, impact on others, big heart and humor. His legacy is a life filled with service to others, the love of God and his family above all else. He was loved by so many and we will all dearly miss him.

The family invites you to leave a message or memory at www.kerrvillefuneralhometx.com . Arrangements are under the direction and care of the professionals at Kerrville Funeral Home (830) 895-5111.