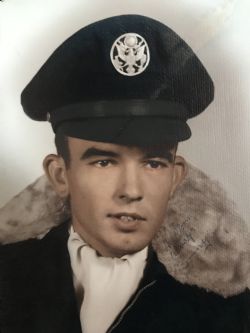 Sonny was born on December 5, 1938, in Buckeye, Arizona to parents Franklin C. and Bula Alene (Martin) Pierce. He was raised in Buckeye, Arizona as well as Bandera, Texas. Sonny enlisted in the United States Air Force in October of 1958. He married Esther Dahlia Anderson on May 30, 2005 in Center Point. Sonny worked as a registered nurse for the VA until his retirement.

Those left to honor and cherish his memory include his son, Dewayne Downing of Whitehall, New York and brother, Jimmie Pierce of Camp Wood, Texas

Graveside Services will be held at 2 PM on Friday November 16, 2018 at Center Point Cemetery in Center Point, TX.

In lieu of floral contributions, donations may be made to the Center Point Volunteer Fire Department.

To order memorial trees or send flowers to the family in memory of Franklin Pierce, please visit our flower store.
Send a Sympathy Card