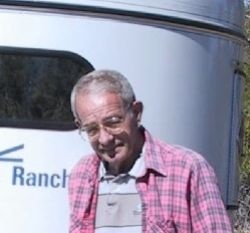 
Gary Frances Kerrick peacefully passed the morning of December 3rd 2016 after a short illness at his beloved Lazy K Ranch outside of Kerrville.

He was preceded in death by his father Kenneth Martin Kerrick and mother Grace as well as his older brother Kenneth Jr.

He is survived by his son Guy Kerrick and wife Carol of Fort Worth and grandsons Trevor (Irving, Texas), Wade (Eugene, Oregon) and Tyler (Dallas, Texas); Sister-in-law Veva Kerrick of El Paso; nieces Velia and Delia Kerrick of El Paso and Ginger Kerrick of Houston; nephew Kenneth III and his wife Alicia of Elk Grove, California and their sons Kenny and Daniel, as well as numerous well-fed critters at the Lazy K.

The service will be private but the family requests any gifts/donations go to the Wounded Warrior Program in Gary's memory.

To order memorial trees or send flowers to the family in memory of Gary Kerrick, please visit our flower store.
Send a Sympathy Card