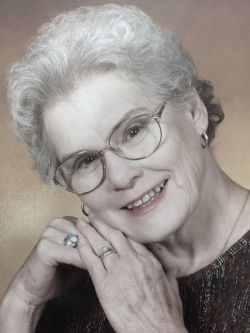 
Georgia Ann (Parker) Spence, age 76, went to her heavenly home on May 25, 2018. Georgia grew up in Jonesboro, AR, but she lived in Kerrville, TX at the time of her death.

Georgia met and married the love of her life, Curtis Spence, in April 1967. Georgia was a homemaker for most of her life. She was a talented seamstress, and she and her two daughters often sported matching dresses, lovingly made, for special occasions. She also enjoyed crafting needlepoint and cross-stitch artwork. When she wasn't at the sewing machine, she could often be found working in the vegetable garden, her rose garden, or canning vegetables and soups for the winter months.

During her 30s, Georgia and Curtis moved to Kerrville, TX, where they lived for three years, before returning to Arkansas. They attended Sunset Baptist Church in Mountain Home, where Georgia helped lead the youth program. They made many lifelong friends in the Hill Country area, many of whom they would return to visit every year. While in Kerrville, Georgia attended nursing school and worked at Peterson Hospital. She had a giving, caring heart!

Georgia and Curtis loved to travel, and spent many weekends and vacations traveling with family to state campgrounds and national parks. Early in their marriage, the couple used their many talents to renovate a school bus, creating an RV that would sleep 9-10. Occasionally, their forays included only their two daughters, but more often than not, they would load up parents, nieces, and nephews to share in a grand adventure. Many great times and precious memories were shared during these trips. Other RVs would follow the bus, but nothing that holds quite the same place in the family's heart.

Both Georgia and Curtis were faithful blood donors, as well as volunteers, for the Red Cross. The family asks that in lieu of flowers, a donation, of blood or cash, be made to the Red Cross.

A private memorial service will be held for family and friends on Saturday, June 30th, at 2:00 pm, at the home of her nephew, located at 727 CR311 (Simpson Rd), Jonesboro, AR.

To order memorial trees or send flowers to the family in memory of Georgia Spence, please visit our flower store.
Send a Sympathy Card