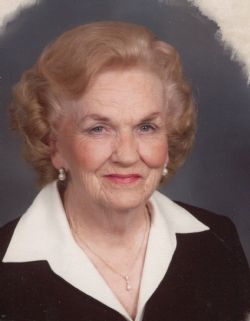 
KERRVILLE - Gertrude Estelle Andrus, 87, was called home on Tuesday, April 4, 2016, in Kerrville at a local care center .Gertrude was born in Waxahachie, Texas on January 8, 1929 to ET and Nova (Lynch) Browning.

Gertrude married the love of her life, Cleveland Andrus on February 5, 1949 in Calcasieu Parrish, Louisiana. She worked many jobs during her life most notably being personal director of Mooney Aircraft, legal secretary for Lavern Harris, legal secretary for Thomas Pollard and working in the legal department at Shell Oil. She will be dearly missed.

She is proceeded in death by her parents, ET and Nova Browning; husband, Cleveland Andrus; brothers, Eugene, Lee, Billy and ET Jr.; sisters, Francis and Barbara.

Survivors include her son, Daniel Andrus; daughter, Janet Perez; nieces Victoria and Katherine Neunhoffer; along with a host of loving friends and neighbors.

In lieu of floral tributes, memorial contributions can be made to the charity of one's choice.

Garden of Memories Cemetery
Kerrville, TX  78028
To order memorial trees or send flowers to the family in memory of Gertrude Andrus, please visit our flower store.
Send a Sympathy Card