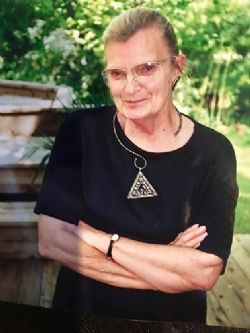 
Gloria Musto found her sunbeam and departed this world Sept. 25 at her home in Center Point, Texas. She succumbed to pulmonary hypertension and congestive heart failure at the grand age of 93. As one of her neighbors said fondly, the little blue-eyed gal "was tough as nails".

Born August 12, 1926, in the Bronx, New York City, she was the youngest of six children of Herman Hoppe and Matilda Paschadel Hoppe, both natives of Poland. Gloria was preceded in death by her parents and by siblings Rudy, Freddy, Flo, Elsie and Dottie.

She is survived by a daughter, Janine M. Hess of Austin, Texas, and also leaves behind her beloved kitty, Cappuccino.
An Air Force wife for more than 20 years, Gloria dabbled in floral design, painting, and furniture refinishing, and lived in Ft. Walton Beach, FL., Anchorage, AK., Grand Forks, ND., and San Antonio and Boerne TX, before retiring just east of Kerrville.

During her time in Boerne, Gloria and family purchased an old two-room building that had been the first bank in Boerne, and moved it to their property on the Sisterdale Road. Prone to gallivanting about the Texas Hill Country collecting vintage treasures, Gloria operated The Hand & Heart antique and re-sale shop out of the former bank.

Upon moving to Center Point, Gloria bought a turn-of-the-century farmhouse, where she lived for more than 30 years, remodeling the house and "learning by doing" along the way.

Family and friends of Gloria Musto thank the staff and volunteers of Peterson Regional Medical Center and Alamo Hospice, for the kind care given through the years, and in her final days.

Mom Gloria was an animal lover, therefore memorial donations may be made to the AWS Freeman-Fritts animal shelter in Kerrville.

Memorial gatherings in both Kerrville and Austin are pending and are to be held at a later time.

"Sweet dreams till sunbeams find you,
Sweet dreams that leave all worries behind you,
But in your dreams, whatever they be,
Dream a little dream of me"

To order memorial trees or send flowers to the family in memory of Gloria Musto, please visit our flower store.