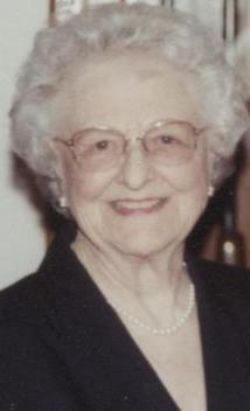 Hallie Margaret (Miller) Umphress, 99, of Opelika, Alabama and formerly of Kerrville, Texas passed from this life after a brief illness on Wednesday, February 22, 2017 in the Bethany House Hospice Care Center, Auburn, Alabama. She was born on November 24, 1917 in Lindsay, Oklahoma, the youngest of four children to Oscar Ashley and Helen Eudora Miller.

Margaret was brought up in a loving and deeply religious Methodist family. Margaret has remained a Methodist and had maintained membership of First United Methodist Church in Kerrville, Texas, where she and her late husband enjoyed being part of the Keystone Sunday School Class.

She received her education from Southern Methodist University, Powers School in Boston, Massachusetts, and Oklahoma City University. Margaret had a wonderful and adventurous career in radio and television as a broadcaster, producer, and writer for many years. She worked at stations in Oklahoma City, the University of Oklahoma, Norman, Oklahoma, The American University, Washington, DC, and in Sacramento, California.

On December 24, 1946, Margaret and then Capt. F.E. Umphress, Jr. were married in Luther Place Memorial Church in Washington, DC. They became a United States Air Force military couple traveling and living in various parts of the world. A few years later, a son David and a daughter Katherine (Kate) were born. Margaret gave up her career to be a full time wife and mother to her children --- a position she loved and treasured with all of her heart.

After her husband retired in Omaha, Nebraska from active duty as a Lt. Col., they lived in various communities before settling in San Angelo, Texas to be close to Goodfellow Air Force Base. Living there for many years and seeing their children grown, educated, and married with families of their own, Frank and Margaret moved to Kerrville, Texas in 2002 to be close to family. Upon the passing of her husband on October 22, 2008, a few months later, Margaret decided to make the move to Alabama to live near David and his family.

She always cherished her time in Kerrville with her daughter and son-in-law, and never forgot her dear church family and friends, many of whom stayed in touch through mail, email, and telephone.

A private family service will be held at Ft. Sam Houston National Cemetery, San Antonio, Texas where she will join her husband for eternal rest.

Local arrangements are under the direction and personal care of the professionals at Kerrville Funeral Home. (830) 895-5111

To order memorial trees or send flowers to the family in memory of Hallie Umphress, please visit our flower store.