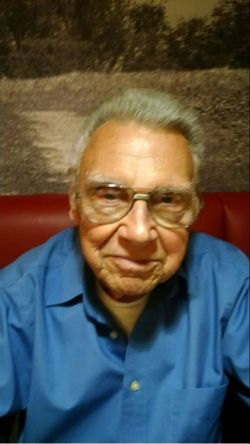 Hal was born to Harry Long and Lillian Agnes Lambert, on August 12, 1927 in
Endicott, New York. He joined the Army Air Corp at the age of 17, and proudly
served his country during World War II in the European Theater. Following his
return home, he met Caryl Anne Schenk, and on September 18, 1948, they
married in Pittsford, New York. Hal and Caryl welcomed their first child,
Michelle, and moved to Texas shortly after the birth of their second daughter,
Pat, where they were blessed with two more daughters, Judy and Robin. He was
hired by Ford Motor Company, where he started on the line, then progressed into
management. Night school earned him his Mechanical Engineering degree,
which he put to use for 35 years with Ford. Hal was everyone's favorite neighbor,
as he could help with almost anything from electrical to car mechanics. Always
one to step in to help, after retirement from Ford, Hal served as a civilian
volunteer public safety officer for Pima County and the State of Arizona for more
than twenty years.

He was preceded in death by his beloved wife of 63 years, Caryl (d. 2011), his
parents, Harry L. and Lillian A. (Woolley) Lambert, and sister, Karen Lambert
Woodburn.

A private family gathering was held at Kerrville Funeral Home.

The Family invites you to leave a message or memory at wwwkerrvillefuneralhometx.com by selecting Obituaries. Select "Sign Guestbook" at the right top of the individual memorial.

Arrangements are under the direction and personal care of the professionals at Kerrville Funeral Home, (830) 895-5111

To order memorial trees or send flowers to the family in memory of Harry Lambert, please visit our flower store.
Send a Sympathy Card