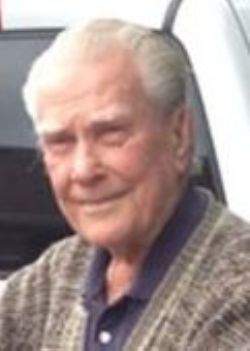 
Howard Tampke passed away at a local hospital in Kerrville, under the watchful eye of his three loving daughters, on Monday, July 25 2016.

Howard was born to Helene Zeller Tample and Albert Sunim Tampke in San Antonio, Texas on October 3, 1919. The middle of three children, Howard grew up there and graduated from Thomas Jefferson High School in San Antonio and then graduated proudly from the class of 1942 at Texas A&M University. Following graduation, he enlisted in the US Navy and trained in Annapolis. He served proudly in World War II in the Pacific Theater as decorated officer.

After his naval service he, returned to San Antonio to work for Goodyear Tire and Rubber Company. He married Helen Eleanor A. Balskis of New York in 1947, and they had three beautiful daughters, (Doreen, Sue Ann, Jane). Several years following her untimely death, he married the second love of his life, Marguerite Ash Stewart. Marguerite and her two sons joined Howard and the girls for a wonderful life journey that continued until she passed away in 2012. At that time, Howard moved to Kerrville where he spent his last several years surrounded by his loving daughters.

Howard was quite an outdoors-man all his life, loving to hunt and fish, especially in Port Aransas, Texas. He also loved to play golf taking it up late in life and ''shooting his age'' on a number of occasion. He also was a huge sports fan of the San Antonio Spurs and was deeply passionate about his ''fighting Texas Aggies''.

Howard is survived by daughters Doreen Williams & husband Steve of Dallas, Sue T. Gaskamp & Husband Lee of Brenham, Jane Cox & Husband Bernie of Kerrville, and his son Michael Stewart & wife Judy of San Antonio. He was preceded in death by wives & youngest son Danny Stewart of San Antonio. He is also survived by a number grandchildren & great grandchildren in Dallas, San Antonio, Los Angeles, Austin, Longview, Houston, Road Island & Seattle. He was greatly loved and will be greatly missed by all.

In lieu of customary remembrance, memorial contributions may be directed to the National Museum of the Pacific Theater in Fredericksburg, Texas or the Texas A&M University in College Station, Texas.

There will be no local services at this time for Howard Tampke, 96, of Kerrville, TX who passed from this life on July 25, 2016.

To order memorial trees or send flowers to the family in memory of Howard Tampke, please visit our flower store.