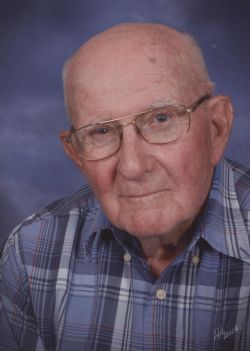 
James Mathis (Mac) Barnett, 91 of Kerrville, Texas, passed away on Friday, June 14, 2019 at a local care facility in Kerrville. James was born February 18, 1928 to Bryant Barnett and Grace Howard in Birmingham, Alabama. The Barnett Family moved to the Rio Grand Valley. where he spent most of his child hood days in Mission, Texas. While attending Mission High school, Mac became captain of the football team and he received the "All Valley Football Team" athletic award. After graduation, he entered the United States Marines for two years on Guam and received the WWII Victory Medal. After serving the U.S. Marines, he returned home and started working in Harlingen, Texas where he met the love of his life Reva May Kratzer at Southwestern Bell Telephone Company. They were married in the Second Baptist Church of Corpus Christi on July 21, 1950 with the Rev. Roloff Officiating where their ceremony was Broadcasted over the radio station KWBU on the Family Alter program.

Mac and Reva had one son Bryan Barnett who was born in Harlingen. They were transferred to Houston in 1960, while in Houston Mac attended night school and graduated from the University of Houston. Then transferred to San Antonio, in 1968. After 32 years, both Mac and Reva retired and moved to Divine, then moved to Medina Texas, where his wife Reva passed away on June 10, 2002. Mac returned to Kerrville, where they spent their Honeymoon at a summer resort. He was a volunteer at the Dietert Center, Meals on Wheels. He was member of the Mason as a Master Mason and Shriners for 61 years, and a fifty year member of the Kerrville Chapter #24. He enjoyed his Brothers of the Shriners. He always took care of his family and friends until the end. We Love You Dad, Uncle Mac, Pop

Mac was preceded in death by his wife; Reva May Barnett, Brother Rayford Barnett and his Parents; Bryant and Grace Barnett.

Funeral Service will be 2 PM Friday June 21, 2019 with visitation starting at 12 Noon until service time in the main chapel of Kerrville Funeral Home 1221 Junction Highway Kerrville, Texas 78028 (830-)895-5111 with burial to follow at Garden of Memories


Arrangements are under the direction and personal care of the professionals at Kerrville Funeral Home.
(830) 895-5111