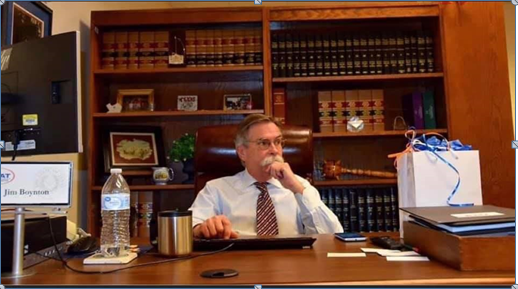 Jim was the only child of educators Dr. Joshua Bickham Boynton and Rena Stambaugh Boynton.

Jim was a graduate of Texas Tech University. During his enrollment at Texas Tech, he was highly active in the Association of Student Government where he met many of Texas’s later leaders.

Because of his love of government, he ran for state representative in Grayson County, Texas, where he caught the eye of State Democratic Party Chairman Bob Slagle. Although Jim did not win his campaign, Chairman Slagle tapped him to come to Austin and work for the Texas Democratic Party. Jim exceled in his new environment. During legislative sessions, Jim served as legislative and administrative assistant to many of Texas’ prominent state representatives.  Over the years, Jim became known as one of the very few rules and election law experts in Texas. During election years, Jim served in many capacities ensuring successful election administration, including as Democratic Party Primary Director. In the Texas Capitol, Jim became the “go to” guy for other state representatives’ administrative assistants. Jim knew every inch of the Capitol; how to secure and furnish an office with the best location to the House floor to enhance his representative’s stature. Many have said Jim might have been the longest serving legislative aide in Texas’ history. Even if he were not, he was a legend in the Texas Capitol. He mentored hundreds of Capitol staff on their journeys to learn how the Capitol and Legislative processes functioned.

“Jim was one of those rare people that affected the lives of almost every person in Texas...that you probably never knew who he was,” a friend said. Texas is a greatly better place because of Jim Boynton.

Said T.G. Caraway of Lubbock, another longtime friend, “Sam Rayburn was asked one time what the job of a politician was? He said that it was to help people. Jim Boynton lived that job every day of his life. We can all strive to be more like the Sam Rayburns and Jim Boyntons of this world.”

Jim’s deep faith in God led him throughout his life. An avid reader, he studied religion and lived it as a member and usher of First United Methodist Church in Sherman.

Survivors include many cousins from both sides of his family tree, an exceptionally long list of close friends including families: the Martinezes of Austin, the McDonalds of Fort Worth and the McLeaishes of Odessa. They accepted Jim as one of their own and regularly welcomed him to family gatherings, vacations and reunions.

In a year of limited access to hospitals, many loved ones were not allowed access to wish their loved ones Godspeed. The caring staff of St. David’s South have his friends eternal thanks for arranging a Zoom conference, so Jim was able to visit with some of his friends before passing. His close friends David Parnell, Jane Hedgepeth, Betty Burris, Stephen McDonald and Susan Martinez virtually held his hand and told him that many loved him and wished him Godspeed. Jim passed hours later and is now in God’s hand.

There are no services planned at this time.

To order memorial trees or send flowers to the family in memory of James Boynton, please visit our flower store.
Send a Sympathy Card