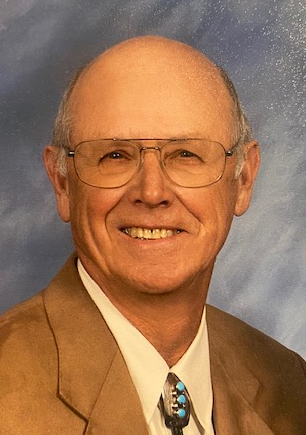 James was born and raised in southeast Texas, primarily in the Houston area. He graduated from the University of Houston as a petroleum engineer. Following a tour of duty in the United States Navy, he pursued his career of oilfield discovery beginning in Texas. His career took him to California, New Mexico, Ireland, Alaska, Louisiana and finally back to Texas, where he retired in Hunt in 1995. James married Barbara Ann Sorrell in San Angelo, Texas in December of 2016. He was a member of the Hunt United Methodist Church and  the Kerrville Masonic Lodge #697, A.F. & A.M.  James spent his retired years managing his ranch of goats, rocks and cedar trees.

He is preceded in death by his parents and first wife, Barbara H. Evans.

Those left to honor and cherish his memory include his wife, Barbara Ann Evans; son, Leslie Evans; daughter, LaDonna Riley and son in law, Scott along with his grandchildren, Morgan and Evan Riley.

In lieu of flowers donations may be made to the Hunt United Methodist Church, 120 Merritt Road, Hunt, Texas 78024.

A service to celebrate James’s life will be held at a later date.

To order memorial trees or send flowers to the family in memory of James Evans, please visit our flower store.
Send a Sympathy Card