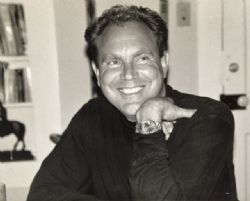 
KERRVILLE- James Andrew (Jim or Jimbo) Whittenburg IV passed away peacefully on February 11th at his home near Mountain Home, TX, with his two children and friends at his side. Jim was born in Amarillo, TX, on October 21, 1955, the third of five children, and only son, to James Andrew Whittenburg III and Jeanne Price Whittenburg.

Beginning in his childhood, Jim learned the ranching and cattle business at the Turkey Track Ranch and was later involved with ranches in New Mexico: the Double O Bar, Sapello, and the TO Ranch. Jim participated in cutting horse training and competitions nationally with the NCHA. He also became a licensed helicopter pilot, which facilitated his travel between Amarillo and the ranches.

Jim later moved to Santa Fe, where he opened Lestat Gallery, which displayed his talent for the visual and decorative arts, as well as his sophisticated taste and maximalist aesthetic. Wherever he lived, Jim was most in his element entertaining friends and guests with his laconic wit, culinary talents, unbridled style and eclectic collections.

After living in Dallas for a number of years, Jim returned to his ranching roots and settled on his own ranch near Mountain Home, TX, where he developed a high-fenced game operation with his son, J. Through that endeavor, Jim was able to enjoy his passion for native and exotic wildlife from around the world. He was also able to fulfill the wishes of those wounded while in the armed services through the Combat Marine Outdoors charity and the wishes of children through the Make A Wish Foundation.

Jim was preceded in death by his mother, Jeanne Price Whittenburg. He is survived by his father, James Andrew Whittenburg III and stepmother, Katsy Whittenburg of Dallas, his two children, James Andrew (J) Whittenburg V and Catharine Whittenburg Vexler, his son-in-law, Jeff Vexler, and grandson, Jackson Andrew Vexler of San Antonio; Jim is also survived by his four sisters and their husbands Jeanne Latimer (Bob), Liz Redwine (Ras V), C.C. Armstrong (Stewart) and Leslie el-Effendi (Wicky), by their children and grandchildren, and by numerous cousins, as well as aunts and an uncle.

The family wishes to thank David Salem for his unwavering support and friendship to Jim and to all of us throughout the years and also William Garrett and the De La Cruz Family for their loyalty and devotion to Jim.

A private memorial service will be held later this spring. In lieu of flowers, Jim's family requests that donations be considered to the charity of your choice or to the following organizations:

The family invites you to leave a message or memory at www.kerrvillefuneralhometx.com by selecting Obituaries. Select "Sign Guestbook" at the top right of the individual memorial.

To order memorial trees or send flowers to the family in memory of James IV, please visit our flower store.
Send a Sympathy Card