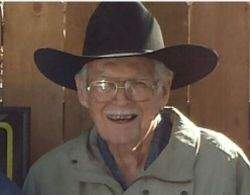 
James R. Lansford of Mountain Home, TX passed from this life on July 3, 2018 in Kerrville. Jim was born on September 8, 1931 in Corpus Christi, TX to Claude and Geneva Lansford.
Throughout his life Jim was a man of many interests and enjoyed the pursuit of knowledge. He graduated from Edison High School in San Antonio in 1949 and went on to Abilene Christian College, but his education was interrupted by the Korean War. He joined the Navy in February, 1950 and served until December, 1960. While in the Navy he earned an Accelerated Program in Electrical Engineering from the University of Madison, Wisconsin. He earned his Law Degree from Western State University in San Diego, CA in 1973, while running his business,Sea-Tronics, which he had for fifteen years. He taught at ITT Technical Institute from 1986 to 1993. After he retired from ITT, Jim started up a tax and business consulting service.

Jim began a life-long interest in Masonic Lodge when he was raised a Master Mason in January, 1959 in Millington Lodge No. 671, Tennessee.. He joined the Scottish Rite and Shrine in the Fall of 1959. In 1985, he received the rank and decoration of Knight Commander of the Court of Honor. In 1995, he was invested with the rank and dignity of Inspector General Honorary. Most recently, he was with Kerrville Lodge No. 697 and the Hill Country Shrine Club, Elks Lodge 2081 and the American Legion.

In Jim's free time he enjoyed driving his John Deere tractor and riding lawn mower on his ranch in Mountain Home as well as sitting on the back porch with a glass of wine and watching the deer in the evenings.

Jim was preceded in death by his first wife, Dolores; son, Jimmy, Jr., and his parents Claude and Geneva Lansford.

Funeral Services will be at 10 AM on Friday, July 13, 2018 at Kerrville Funeral Home. A private interment will be held at a later date.
In lieu of floral contributions donations may be made to Scottish Rite Hospital for Children, 2222 Welborn Street Dallas, TX 75219 or Shriner's Children's Hospital, 2900 Rocky Point Drive, Tampa, FL 33607.