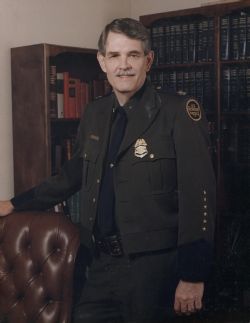 
James (Jim) Sherwood Switzer, Sr. 79, of Kerrville who passed from this life on Saturday, January 4, 2020 at a hospital in San Antonio.

He was born in Honolulu, Hawaii to Charles W. Switzer and Marie Anderson Switzer on May 9,1940.

The family moved to Austin, Texas in 1947, then to Laredo, TX in 1953, where James attended Martin High School. Upon graduation, in 1958, he attended SMU, in Dallas, TX on a football scholarship. His football career ended that year with a neck injury.

He joined the FBI, in 1960 in Washington, D.C. working as a file clerk until joining the United States Air Force in 1962, serving until 1966 when he attended the U.S. Border Patrol Academy.

As a Border Patrol Agent, James worked on the Southern and Northern borders in Texas, Vermont, California, Washington, and Arizona. He also spent over a decade working with the U.S. Immigration and Naturalization Service in Montreal, Canada; Fort Allen, Puerto Rico; St. Thomas, U.S.V.I; and Bangkok, Thailand.

He met his wife Rebecca during his time in Montreal, and they were married in 1984 in Laredo, TX. They lived together in Bangkok, Thailand, where they had several opportunities to travel through Asia, Russia, and Australia. A beautiful life and time for two people who enjoyed seeing the world.

In 1987 James moved with Rebecca to Laredo, TX to be closer to his son, James, Jr. during his final years of high school in Del Rio. He and Rebecca enjoyed football games and the time that they were able to spend with James, Jr., and his friends until August 1988, when James drove with James, Jr. to Dallas to begin his attendance at SMU.

During 40 years of U.S. Government service, and 35 years of U.S. Federal Law Enforcement, James was known as a leader, mentor, and friend to those around him. He taught courses at the Border Patrol Academy, and spoke to several graduating classes there. He was most proud of his brotherhood of Border Patrol Agents from the Department of Justice.

James was also known as a loving husband, father, brother, and son. His anonymous gifts to local charity were many, and given with love, and pride. He was a prolific reader, a deep thinker, and consummate history buff with a sharp, witty sense of humor. He will be deeply missed by his loving wife, Rebecca, and his son, James, Jr.

James is preceded in death by his parents, Charles Wesley and Marie Anderson, and his brother Steven A. Switzer.

In his humble nature James did not wish to be memorialized, rather remembered lovingly by all those he touched. A private family gathering will be held at a later date.

He will rest at Fort Sam Houston National Cemetery in San Antonio, TX.

In lieu of flowers the family asks that you give a gift to your favorite local charity as he would have done.