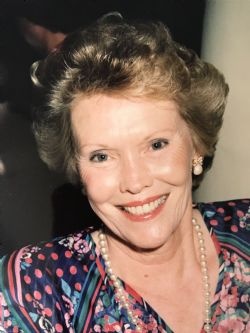 
Jane Kelso Wolcott passed away in Kerrville, Texas on Friday, October 26, 2018. Jane was born December 11, 1927 in Houston, Texas to Ruby Agnes Harding and Howard Farrar Kelso, Sr. She graduated from San Jacinto High School in Houston and attended Texas State College for Women and the University of Houston. In 1948, she married Eldon Nicholson Wolcott of Martin County, Texas. They lived most of their lives in Houston and were married for thirty-three years until Eldon's death in 1981.

Jane was a beautiful, gracious southern lady, a lively hostess and a wonderful conversationalist. She and Eldon traveled the world. During their early marriage they lived in Cochabamba, Bolivia, sharing adventures which Jane wrote about in her published book, ''A View of Tunari''. Jane had the eye of an artist, evident in her needlepoint works gifted to family members.

The family will receive friends from twelve noon until two o'clock in the afternoon on Tuesday, October 30th, at The Houston Racquet Club, 10709 Memorial Drive, Houston, Texas, following a private family service at Memorial Oaks Cemetery. The family wishes to express appreciation for loving care given to Jane by staff members at the Brookdale Guadalupe River Plaza facility in Kerrville, Texas.

Jane requested that memorial contributions be directed to the Houston Methodist Hospital Foundation for the Dr. Alan L. Kaplan Endowment in Obstetrics and Gynecology, P.O. Box 4384, Houston, Texas 77210. Jane felt blessed to have been a thirty-five-year survivor of ovarian cancer and attributed her wellness to Dr. Kaplan's innovative care, and to the many answered prayers of family and friends.