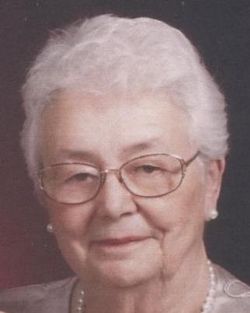 
Janett Rohlfsen Crouse died November 10, 2018, in Kerrville, Texas. Janett was born February 25, 1931, to Elmer and Edna Rohlfsen at home in Germantown, Iowa. She graduated from Paullina High School, Paullina, Iowa.
Janett married Harlan Wesley Crouse on August 14, 1949. They farmed 330 acres and owned and operated one of the larger hog confinement operations in the Paullina area. They retired from farming in 1989.
Harlan and Janett enjoyed traveling in their Holiday Rambler motorhome, starting with a 32 ft unit and working up to a 44 ft unit which was their fulltime home for eight years. During this time they joined the Holiday Rambler RV Club in 1980 and attended many local, regional, and national rallies as well as many caravans and adventures covering all 50 states and into Canada. During their RV years they volunteered in different areas of the country at Presbyterian retreat centers and discovered Mo-Ranch and the Hill Country of Texas. They volunteered at Mo-Ranch for several months each winter from 1991-1996. They decided to retire from RVing and bought a home in Rio Robles Park in Kerrville in 1998 where they lived until moving to Brookdale Independent Living in 2017.
Janett was a long time Presbyterian, first active at First Presbyterian Church in Paullina, Iowa, and then moved her membership to First Presbyterian Church of Kerrville in 1993. Janett served as an Elder, Deacon, and Usher as well as serving on many other committees.
Janett was preceded in death by her parents Elmer and Edna Rohlfsen, her sister Sandra Lloyd and grandson Ryan Endsley.
Janett is survived by her husband, Harlan Crouse, daughters Jane (John) Middents of Ankeny, Iowa; Sue Endsley of Kerrville, Texas; and Kathy (Tony) Wainwright of Burleson, Texas; six grandchildren; nine great grandchildren and two step-great grandchildren; one sister, Ellen (Bob) Ell of Pipestone, Minnesota.
There will be a Service of Witness of the Resurrection of Christ on Friday November 16, 2018 at 1PM in the Sanctuary of First Presbyterian Church, 800 Jefferson St, Kerrville, Texas, followed by a reception in Ryan Hall. There will be a gathering of family and friends at the Rio Robles Club House, 32 Chaparral Drive, Kerrville, from 4:00 pm to 8:00 pm Friday evening.
In lieu of flowers donations may be made to First Presbyterian Church, 800 Jefferson St, Kerrville, TX or to Peterson Hospice, 551 Hill Country Dr., Kerrville, TX