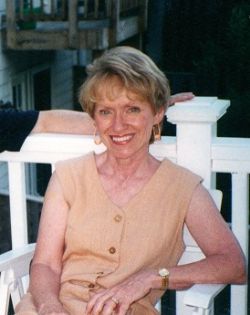 The family, which soon included a younger brother, Arthur, lived in several mid-western states before settling in Dallas, TX. Jan felt privileged to have graduated grade school from Christ the King Elementary School there and high school from Ursuline Academy. She treasured fond memories of her years at UA, maintaining touch with several of her classmates all her life.

She attended UT Austin where she met her future husband, Abe Gutierrez. Jan worked for Braniff Airways in Dallas for two years, then married. She and Abe married April 4, 1959 in Aurora, CO, where Abe was stationed in the AF. Eventually,they were blessed with two children; Mark in 1960 and Melissa in 1964.

The loves of her life, after faith and family were nature, animals(especially dogs and horses)and art, in particular Native American art. She was an avid collector and advocate of same. One of her proudest memories was that of her role in establishing an English riding club in Friendswood, TX,where she and Abe raised their children, living there for almost 20 years.

Recitation of the Holy Rosary will begin at 1 PM, Tuesday, June 27, 2017 at Kerrville Funeral Home.

Interment will be near Dickenson, Texas at Mt. Olivet Cemetery at a later date.

The family invites you to leave a message or memory at www.kerrvillefuneralhometx.com by selecting Obituaries. Select ''Sign Guestbook'' at the bottom of the individual memorial.