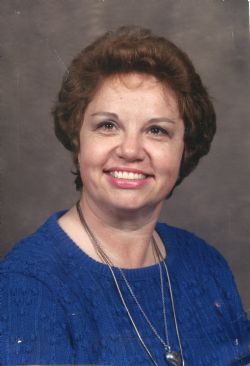 Jo Ann was born June 6, 1936 in Shiner, TX to parents, Alfred and Edna (Haas) Vrana, and grew up in Flatonia, TX. On February 19, 1956 at the Flatonia Methodist Church, she married the love of her life, Richard D. Jones. Together they had one daughter, Kay, and were married for 63 joyous years.

Born and raised in a Czech community, Jo Ann appreciated everything about the culture. She was a role model for her generation in that she respected and appreciated hard work. Jo Ann was raised in the Methodist Church, and continued her stewardship throughout her life in the churches that she became a part of.

They were an Air Force family who arrived to Kerrville, TX in 1962. She first worked at the Charles Schreiner Bank until she found her calling at Kerrville Independent School District. For the next 32 years, she enjoyed her position as the secretary for five different superintendents. Her love for people led her to community involvement at the Dietert Community Center, Women's Shelter and KISD mentoring program.

Upon retirement from KISD, Jo Ann found herself looking to continue with her people skills. She accepted the position of Office Administrator at Kerrville Funeral Home, and worked with the Allen family for a number of years when she decided that KFH had landed on its feet, with her job being completed. She enjoyed the opportunity to see and visit with many families that walked through the door, and she was a true ambassador to all that knew her.

Jo Ann is preceded in death by her grandparents, parents and infant brother. She also had a list of many people outside of her family that she planned on meeting at the pearly white gates of heaven.

Donations can be made in Jo Ann's name to the charity of one's choice.

At Jo Ann's insistence, she asked that there be no formal services for her, as she preferred that we all remember her from her bright smile and infectious personality. The family will celebrate her life in private.

Jo Ann will be dearly missed as she returns to her beloved home and final resting place, Flatonia, TX.


To order memorial trees or send flowers to the family in memory of Jo Jones, please visit our flower store.
Send a Sympathy Card