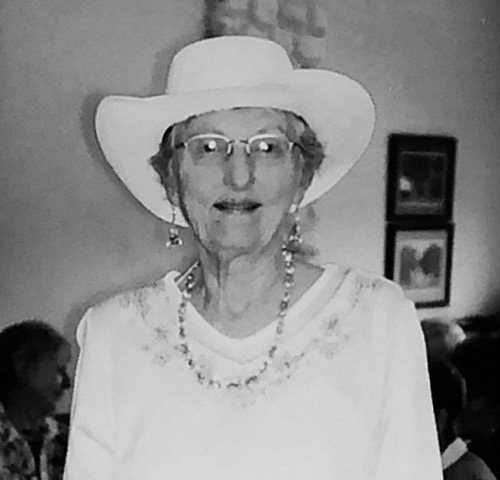 Jo Ann Lochte Redden died at her home in Kerr County on August 3, 2021 after a brief illness.

A rare Kerrville native, Jo Ann was born on December 27, 1932 in her parents’ home across from Spring Street where Kerrville began. She was the daughter of Arthur J. and Marguerite Henke Lochte, and she was of full German heritage. Her parents, sister Carolyn Stewart and husband John Redden all preceded her in death.

Furthering her education , Jo Ann worked on a Master’s Degree at Teachers College of Columbia University. She was introduced to the educational concepts of Maria Montessori, trained at the University in Teaneck, NJ and taught in the Bede Montessori School in Englewood, NJ.

Her future husband, Dr. John Redden, opened his veterinary medicine practice in Kerrville in July 1962. He and Jo Ann met in church the next month, one day before she moved to New York City. After a long-distance romance, they were married at Union Seminary in New York on July 9, 1966.

In Kerrville, Jo Ann started a Montessori School in her birthplace at 932 Water Street. After ten years, the Catholic Church wanted the property to build a new sanctuary and Jo Ann relocated her school into one side of an East Kerrville duplex while she and John lived in the other side. After twelve years of experience teaching, she was convinced that the Montessori method was an especially great way for children to learn.

John retired in 1975 after 20 years in veterinary medicine. Jo Ann and John embarked on many adventures. They hand-built a passive-solar home with a rainwater collection system on acreage outside of Kerrville. They traveled around Texas while John photographed wild flowers and Texas ghost towns and enjoyed both coastal and freshwater fishing. They floated wild rivers in Texas and Utah. All this time the environmental care of their ranch was important to them.

Becoming interested in the paintings left by early Americans along the Pecos River and Rio Grande, John and Jo Ann traveled widely in search of rock art sites throughout the Southwest. Returning, Jo Ann put these designs into stained glass pieces while John painted them on rocks, all as a way of preserving a declining treasure. Jo Ann was a thirteen-year participant in the Texas Arts and Crafts Fair in Kerrville. They also displayed their art in galleries throughout the Southwest. Her display of stained glass at San Antonio’s Witte Museum was one of her favorites.

After John’s death in 2010, Jo Ann became a member of the Hill Country Archeological Association and the  Butt Holdsworth Library Foundation Board. She also joined the Kerr County Historical Commission because of her long association with Kerrville.  She worked actively on her ranch while managing the myriad functions and responsibilities of ranch business.  All the while, she continued her stained glass Indian pictograph interest with shows and galleries.

Memorials may be made to the Southwest Indian Foundation, 100 W. Coal Avenue, Gallup NM 87301.

To order memorial trees or send flowers to the family in memory of Jo Redden, please visit our flower store.