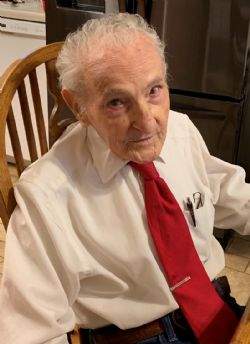 John was born on March 4, 1924 to Alice Fay Parker and Dewy Bryant Custer in Mirando City,Texas. He was raised in Bruni Texas, where he attended both elementary and high school. Upon graduating, John joined the United States Navy where he served during WWII. After the war, he returned home and was employed at Superior Oil Co. It was then he met Lucille Voight and they were married on December 12, 1954. After 50 years at Superior, he retired and he and Lucille purchased a ranch in Junction, Texas and he called it ''Big Cedar Ranch''. After the death of his wife Lucille, he moved to Kerrville. He joined Trinity Baptist Church, where he eventually met a group of friends that helped him and treated him like family until his passing.

JD is preceded in death by his wife, Lucille Custer.

Those left to honor his memory include his brother, Thomas W. Custer and his wife Pam; and several nieces and nephews.

To order memorial trees or send flowers to the family in memory of John Custer, please visit our flower store.