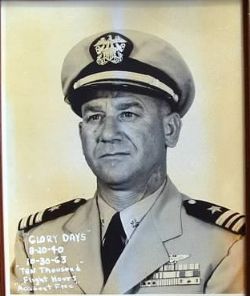 John R. Krone was born November 12, 1920, in York, PA to his parents John Jay Krone and Juliet Spangler/Krone. John enlisted in the US Navy in 1940 and married Nadine Shelley in 1943. John spent 23 years in the US Navy as an aviator and retired in 1963 as Lieutenant Commander. John continued his love for flying with a stint flying helicopters, working in the aerospace industry in Southern California and finishing at Fox Field in Lancaster, CA retiring in 1995. John and his wife, Nadine moved to Kerrville, TX in 1998 and unfortunately Nadine passed away in 1999. John is survived by his 3 children, Judy Smith, Rick and Ted Krone, 6 grandchildren and 4 great grandchildren. John will be greatly missed for his love of wildlife, passion for politics, and his outgoing personality to everyone he met. Dad, was one of a kind!

A private family committal and reception was held at the Inn of the Hills in Kerrville, TX on Saturday, September 29, 2018.