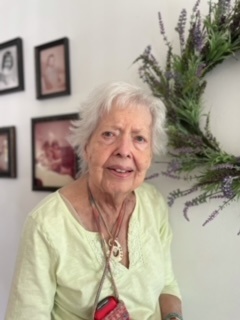 Kathryn Graham Clark, 87, of Kerrville passed from this life on September 27,2021 at her home. She was born the first of two daughters on January 16,1934 in Newport, Arkansas to parents, James Finley and Mary Catherine Stockton Graham.

Kathryn attended Arkansas State University where she earned a Bachelor of Arts degree in fine arts and music. She married Richard Brewer and had three daughters with her oldest daughter proceeding her in death in 1959. Her family moved to Pensacola, Florida in 1967 where she began working as a social worker for the WIN program (one of the first incentive programs in the US) for eleven years. Kathryn played the organ at Summit Methodist Church, was an accomplished musician, commercial artist and business owner. After reconnecting with her childhood friend, Tom Clark, they married May 21,1991. She often spoke of him as the “love of her life”. They spent twenty of the next twenty-nine years traveling the world and visiting their children and grandchildren. The couple briefly lived in Carrollton, Texas and spent seven years in Lawrence, Kansas. In 1998, the couple purchased a home and moved to Kerrville.

In Lawrence, they served as LEMS at Trinity Episcopal, started a food bank and served Sunday dinner to the students of Haskell Indian Nations University. After moving to Kerrville, Kathryn served as a volunteer for five years at the Crisis Council, played Sunday afternoon services at the State Hospital for seven years, played organ at the First Presbyterian Church in Ingram for five years, as well served as a Lay Eucharist minister at St. Peter’s Episcopal Church.

A Memorial Service will be held at St. Peter’s Episcopal Church at 2PM on Tuesday, October 12,2021 with a reception to follow at Tucker Hall.

In lieu of flowers, the family request that donations be made to Peterson Hospice.

The family would like to extend their sincerest thank you to Dr. James Young and the entire staff of Peterson Hospice.

To order memorial trees or send flowers to the family in memory of Kathryn Clark, please visit our flower store.