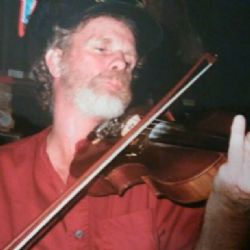 
Kerrville- Kimberly Scott Keating, 62, passed from this life on Monday, January 25, 2016, in a San Antonio hospital. He was born in San Antonio, Texas, March 19, 1953, to Elizabeth and Dorman Keating. His name to all who knew him was always Kimbeau.

Kimbeau was a beloved Texas musician. He played 'anything with strings on it' but will be remembered most for the fiddle. He played with some of the most well-known musicians of our time and taught some to play. Kimbeau was inducted into the Bandera Music Hall of Fame in 2006.

He is preceded in death by both His parents and his brother Matthew.
Family left to cherish his love are his sister Rendy Keating Herrera and husband Joel; niece, Elizabeth Herrera and great-nieces, Binera Herrera, Kashes Herrera, and Josel Herrera. Kimbeau spoke lovingly of his son James. He was loved by many friends who will cherish his memory and music forever.

A celebration of Kimbeau's life will be held at 11 AM on Saturday, February 13, 2016 at Turtle Creek Community Church, 130 Molina Road, Kerrville, Texas. He spent several months a few years back playing at Turtle Creek every Sunday and loved the church and the church loved him. Kimbeau was baptized in Turtle creek during this time and, though humbled by his life of trials, spoke often of his faith.

The family invites you to leave a message or memory at www.kerrvillefuneralhometx.com by selecting Obituaries. Select "Sign Guestbook" at the top right of the individual memorial.