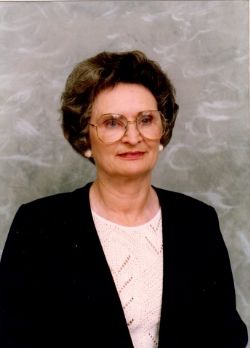 
Lanell Esther Lindemann Lemons passed away on April 3, 2018 In Temple, Tx at Elmcroft Senior Care. She was born in Bartlett, TX on April 10, 1929 to Hilmer Herman Lindemann and Leona Hightower Lindemann. . She was the oldest of seven brothers and sisters.
The family was involved in farming during her early childhood. Upon the United States entering WWII, the family relocated to Brownwood, TX so her father could find work during the construction of Camp Bowie army installation. Lanell attended school in Brownwood and graduated from Brownwood High School.
Following graduation from high school, Lanell attended Draughn's Business College in Abilene, TX. After completion of her studies, she worked as an executive secretary for numerous oil companies.
In 1961, she met her future husband and was married to W E (Bill) Lemons September 1, 1962 in Abilene. They resided in Abilene for several years until moving to Boerne, TX where Bill worked at Montgomery Wards in San Antonio.
During their time in Boerne, Lanell worked as executive secretary to a mental health counseling service. When the opportunity presented itself, she and Bill purchased a furniture store in Kerrville. After a few years of commuting between Boerne and Kerrville, they made the decision to move to Kerrville. After selling the furniture store, they remained in Kerrville. During years of Bill's declining health, Lanell was his loving caregiver. Following Bill's death, Lanell continued to live in Kerrville.
Lanell was a life-long Baptist and attended Western Hills Baptist church in Kerrville. She made many good friends among the members of the church. Her neighbors loved her and helped her in many ways, when she would allow them to do so. She was a very determined, independent lady. She could be seen on a ladder, cleaning her gutters even into her eighties. When the men in the neighborhood offered to help out, she would tell them thank you, but no. If she set her mind to do something, you didn't get her to change it.
When her health would no longer permit her to live alone, she told her youngest brother, Eugene Lindemann, to find her a place to live in Temple, TX. She moved to Elmcroft Senior Care where she received loving care until she died.
Lanell never had children of her own, but was the loving aunt to 18 nieces and nephews, 41 great nieces and nephews, and 56 great-great nieces and nephews. She also planned some special activity for the young ones at the Lindemann Family Reunion each year. Often, she would work on her plans for the whole year between reunions. As recent as three years ago, you would see her participating in the family baseball game and it wasn't as an observer. She was actually batting and running bases at the age of 86.
Lanell is survived by her step-son, Marion Lemons of Kansas; brother, Albert Charles Lindemann and wife, Barbara, of Olympia, WA and Eugene Roy Lindemann and wife Judy, of Temple, TX.
She was predeceased by her husband, Bill Lemons; her father and mother; two sisters, Lavena Lindemann Banta of California and Sara Lindemann Craig of Arcadia, Florida; two brothers, Hilmer Herman Lindemann, Jr of Abilene, TX and David Dwight Lindemann of Brownwood, TX.
Graveside services will be at Garden of Memories Monday at 11:00 AM in Kerrville with Pastor Frank Pullin officiating.
Arrangements are under the direction and personal care of the professionals at Kerrville Funeral Home. (830) 895-5111.