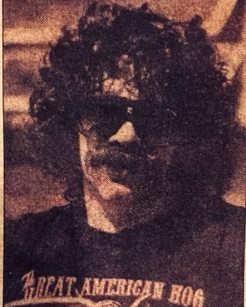 Larry Wayne Black, 66, of Kerrville passed from this life on December 5, 2022 at his residence.

He was born in Whittier, CA on May 6, 1956 to parents Jack Black and Donna Middleton Black.  He grew up in and spent the majority of his youth in Whittier, CA and in 1972 the Black family moved back to Kerrville to be closer to family.  Larry finished out his education at Harper High School, graduating in 1974. In the 1980s Larry accompanied longtime friend Michael MacDougall who was a battling terminal cancer at the time on a 5000 mile motorcycle run to publicize the work of Heart of the Hills hospice and other similar facilities. Larry remained in Kerrville the rest of his life enjoying music, motorcycles, Westerns and his family and was a long-standing member of Texas A.B.A.T.E.

He is preceded in death by his parents, Jack and Donna Black.

Memorial can be made in Larry’s memory to the American Cancer Society.

A memorial service will be held on Sunday, December 11, 2022 at 2PM at Camp Verde picnic area.

To order memorial trees or send flowers to the family in memory of Larry Wayne Black, please visit our flower store.