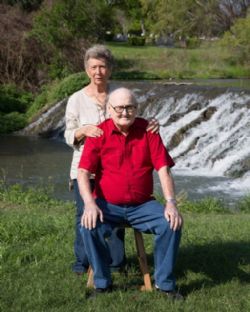 Larry was born on May 23, 1935 in Traverse City, Michigan. He joined the United States Air Force in May of 1952 and rose to the rank of Master Sergeant; he retired in May of 1973. During his military career he traveled to many states and countries, but would always return home to Michigan where he made his lifelong commitment in May 1956 and married Patricia Ann Lappo of Traverse City. In August 1969, after seeing the world, Larry loaded his six children and wife in a 1957 Chevy station wagon and headed for his last military station at Lackland Air Force Base, San Antonio, Texas where he would place his roots. Larry was a lifelong member of VFW Post 9174, American Legion Post 579 and the Fraternal Order of Eagles

After Larry's military career ended, he started a new career as a production manager at King Koil Bedding in San Antonio, Texas. Larry's hard work and dedication allowed him to excel. With only a 9th grade education, but the lifelong desire for knowledge, he read every book of the encyclopedia and was able to rise to the position of Vice President of Operation before his retirement in 1998. Larry was awarded his high school diploma in October of 2014.

Larry was a three-time cancer survivor.

Services will be held at Good News Lutheran Church, 11020 Old Corpus Christi Hwy, San Antonio, TX 78223, on Monday, April 16, 2018, at 10 AM. A luncheon and fellowship will follow. Interment is scheduled at Fort Sam Houston National Cemetery with full military honors at 2:30 PM.