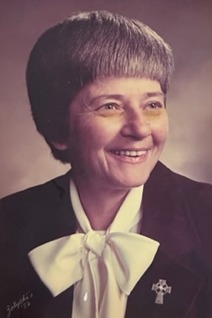 Laura Jean Laing, 93, of Kerrville, Texas passed from this life on April 22,2022 at her home. She was born in New Brunswick, New Jersey to Herbert James and Anetta Belinda (Pardun) Miller.

Laura grew up in New Brunswick, New Jersey with her cousins, with whom she was very close to. After attending college in Boston, she headed west to Riverton, Wyoming, where she taught PE for four years. In Riverton, she met William E. Laing, they got engaged in New Orleans and later married in New Jersey. After marriage, she and Bill travel a lot due to his job and together they raised four children.

Laura was very active as a Girl Scout Leader for four years, something she greatly enjoyed. Once they moved to Kerrville, she joined a local fitness center where she became part of the “swimmin’ women”, a water aerobics group of tight knit friends.

She is proceeded in death by her parents, Herbert James and Anetta Belinda Miller; husband William E. Laing and son in law, Richard Spangler.

Those left to honor and cherish her memory include her four children, two grand puppies and two grand kitties.

A Memorial Service will be held at St. Paul’s Methodist Church at a later date.

In lieu of flowers, the family requests donations be made to the Riverside Nature Center, Hill Country Youth Ranch or Peterson Hospice.

To order memorial trees or send flowers to the family in memory of Laura Jean Laing, please visit our flower store.
Send a Sympathy Card